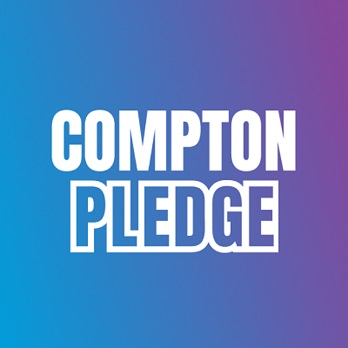 Compton Mayor Aja Brown announced The Compton Pledge, a landmark guaranteed income initiative that will distribute recurring, direct cash relief to approximately 800 low-income residents for two years, starting in late 2020. Among city-led guaranteed income initiatives in the United States, the Compton Pledge will be the largest pilot, and is intentionally designed to challenge the racial and economic injustice plaguing both welfare programs and economic systems. It plans to reach irregularly or informally employed residents, immigrants of varied legal status, and the formerly incarcerated.

The Compton Pledge is led by Mayor Aja Brown in partnership with the Jain Family Institute, an applied research group with a focus on guaranteed income, and the Fund for Guaranteed Income, a registered public charity launched to steward guaranteed income as a path to racial justice. The Compton Pledge is supported by a Community Advisory Council of trusted leaders and activists to co-design the mission-driven program. Among the groups represented are: Brotherhood Crusade, CHIRLA, One Fair Wage, My Brother’s Keeper, Shields for Families, Neighborhood Housing Services, Color Compton, Sylvia Nunn Angels, Vecinos Unidos Por Compton, Compton YouthBuild, Compton College, Compton Advocates, and Originals Nation.

Under the program, to be launched in late 2020, a pre-verified group of low-income Compton residents will be notified of their selection and begin receiving cash transfers shortly thereafter. Recipients will be able to choose between multiple payment options to best suit their needs. Unbanked Compton residents will be provided with no-cost financial services; and, in partnership with a broad-based community coalition, a new online platform will facilitate applicants’ access to existing legal, psychosocial and counseling services, while lowering the burdens of enrollment. All funds are being raised privately and will not affect the city’s general fund.

Aja Brown, Mayor of Compton, said, “I know firsthand what guaranteed income could have done for my mother. I’ve watched the many sacrifices she made, including walking to work to provide for my brother and I. Like most Americans, we were one emergency away from having to move, which we did many times, if anything unplanned happened because of her restricted income and prioritizing being present for her children. People in our community are going through tough times, and I know that guaranteed income could give people a moment to navigate their situation, and have some breathing room to go back to school, explore a new career path, spend time with their children, or improve their mental and emotional well-being. Ensuring all people are able to live with dignity is something we should all strive for in America.”

Patrisse Cullors, an advocate of the Compton Pledge and co-founder of the Black Lives Matter movement, said, “Guaranteed income is an urgent and necessary strategy for addressing the economic realities of racial injustice. I’m thrilled Mayor Brown and Compton are leading the way in this growing national movement.”

The case for guaranteed income nationally and in Compton is undeniable. Compton, a city of 95,000 residents, acutely faces many of the issues that have defined a national conversation about racial injustice and structural inequality. Many of Compton’s residents, of whom 30% are Black and 68% are Latino, are either unemployed, poorly paid, or ineligible for government assistance. Upwards of 1 in 5 Compton residence live in poverty—double the nationwide average. Local housing assistance in Compton is at capacity, presenting unaffordable hardships for a city where 46% of residents are renters. In Compton, rates of unemployment have risen to 21.9% since the beginning of COVID-19, and a growing number of residents regularly rely on food pantries.

The program will be rigorously evaluated by an independent research team. Participant names will be kept anonymous, but preliminary findings will be reported at six-month intervals and a live data dashboard will be shared once disbursements begin. The Compton Pledge builds on the results of previous pilots to study many of the key unanswered questions about the policy: the optimal implementation and design, as well as ideas towards long-term financing at the municipal level. Ambitious in its scale and design, it aims to inform the state and federal guaranteed income agenda.

Compton joins a growing movement of cities across the country developing guaranteed programs in response to the financial precarity exposed by the COVID-19 crisis. Mayor Brown in June 2020 became a founding member of the Mayors for a Guaranteed Income, a consortium of 25 American Mayors committed to advocating for a national system of direct, recurring payments to vulnerable families.

Michael Tubbs, Mayor of Stockton, California, said “Guaranteed income will afford people the dignity of an income floor and agency to make choices for themselves.

I look forward to seeing the data support what Mayor Brown already knows to be true of her constituents: poverty stems from a lack of cash, not a lack of character.”

To learn more about the Compton Pledge or how to get involved, please contact This email address is being protected from spambots. You need JavaScript enabled to view it. .

An investigation led by the FBI and the Los Angeles Police Department Tuesday night and this morning resulted in the arrest of 14 defendants linked to a street gang on federal charges alleging the distribution of narcotics, some of which were sold to customers out of two South Los Angeles storefronts.

The investigation -- dubbed Operation Hoover Dam -- resulted in three indictments being returned over the past few weeks by a federal grand jury in Los Angeles.

The indictments allege that the defendants -- all reputed members or associates of the gang, or alleged drug dealers who operated in gang territory -- sold methamphetamine, crack cocaine, cocaine and phencyclidine, known as PCP. One indictment also alleges weapons violations, including carrying a firearm in relation to a drug trafficking crime, according to the U.S. Attorney's Office.

Bobby Lorenzo ``Zo'' Reed, 56, the owner of the H&E Smoke and Snack Shop, and Andrew “Batman” Tate, 52, the owner of TNN Market, each sold meth, crack and powder cocaine from their respective South Los Angeles stores, referred customers to one another, supplied one another, and directed their employees to engage in drug sales and referrals, according to the indictment, which details dozens of alleged narcotics transactions in 2017 and 2018.

The 32-count indictment further charges Tate and a second person with conspiring to distribute heroin inside Solano State Prison in Vacaville. In that conspiracy, Tate is accused of supplying heroin to Lashina Lacy, 33, of Fresno, who allegedly attempted to smuggle the contraband into the prison for an incarcerated gang member, who, in turn, intended to sell the heroin to other inmates, court papers state.

As a result of that part of the investigation, which included the California Department of Corrections and Rehabilitation, the heroin was intercepted before entering the prison.

The three indictments charge a total of 15 defendants. After 14 arrests late Tuesday and early Wednesday, authorities are continuing to search for one defendant, Ricky Blue, 51, according to the U.S. Attorney's Office.

The defendants were taken into custody primarily in South Los Angeles, but arrests were also made in South Gate and Fresno.

If convicted of the charges alleged in the indictments, most of the defendants would face mandatory minimum sentences of five or 10 years in federal prison, prosecutors said.

High school seniors whose dreams are to power the future and make a difference through the study of science, technology, engineering or math (STEM) are invited to apply for Edison International’s $1.2 million Edison Scholars Program.

Applicants must live in SCE’s service area and plan to be a full-time undergraduate student majoring in a STEM field. Eligible students also must be a high school senior, have at least a cumulative 3.0 GPA and demonstrate financial need. Students from underserved communities and ethnic minorities are encouraged to apply. Dependents of Edison International and SCE employees and retirees are not eligible for the Edison Scholars Program.

“Navigating school while pursuing their passions in the midst of a pandemic, the class of 2021 has already shown how resilient they are,” said Pedro Pizarro, president and CEO of Edison International. “We are so proud to help these students pursue their dreams in STEM.”

Scholarship recipients will be announced next spring. They may also be eligible for summer internships at SCE after completing their second year of college.

Since 2006, Edison International has awarded an estimated $11.1 million in scholarships to 670 students through the Edison Scholars Program. 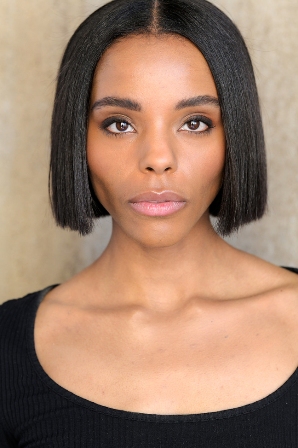 Haleigh Nickerson, a woman of color, photographer and digital artist based in Los Angeles, last week filed a lawsuit against Diesel and once famed and now controversial photographer, Terry Richardson.  The lawsuit filed in federal court alleges willful copyright infringement. The work at issue is Nickerson’s “Sista Soulja” photo, which she created in August 2016.  The work which she posted on Instagram. In general, the images show a woman of color wearing a green, red, and black costume in front of a red background with white stars.

The following year, Nickerson claims Diesel included a photo very similar to hers in its new campaign, “Rules for Successful Living,” shot by Terry Richardson. The campaign image shows another woman of color in front of the same background, in a similar pose and wearing clothes of a similar palette. Nickerson called it a “blatant act of infringement.”

Terry Richardson, who was once a famed and in high demand photographer, has lost prestige and prominence since the emergence of the #MeToo movement in 2017, resulting from rape and assault allegations against movie producer Harvey Weinstein. 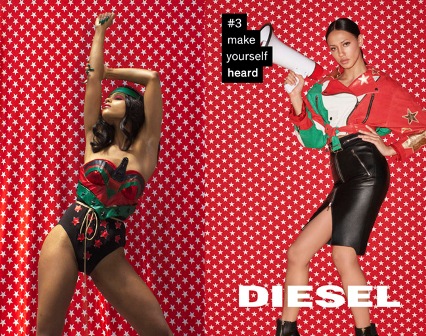 Several allegations of  assault against Richardson has Nickerson is also concerned that her artistic work would be tied to Terry Richardson, and as a result, connect her reputation with that of the disgraced photographers. damaged his career.  Richardson has denied these allegations but has not been held in the same regard as he was during the height of his career.

Nickerson says she was actually in contact with Diesel personnel directly connected to the campaign and even made contact with the model in Diesel’s ad.

It was reported in WWD, an online fashion magazine, that the model replied: “Ew, that’s what I hate about the industry … I  knew something was wrong … makes me so sad that happened.”

Diesel said the company “rejects” Nickerson’s claims and even told WWD that the shoot at issue was “shot and produced in April 2016 by an outside agency — many months before Ms. Nickerson’s images were published.”

Nickerson says she reached out to Diesel prior to filing her lawsuit, argued that the brand “knowingly and intentionally copied and utilized the most recognizable and constituent elements of the ‘Sista Soulja’ photograph by plaintiff that are original.”

She said the “copying is so brazen that they even copied the name of the work.

Nickerson filed a federal lawsuit alleging that Diesel and photographer, Terry Richardson, stole her work, and is also concerned with the image being associated, in any way, with Richardson and his reputation.  She is seeking an injunction of Diesel’s use of the image at issue, an order requiring all such reproductions be destroyed, and that all profits derived from the use of the image be handed over to her, along with unspecified compensatory damages. For such a case to land in federal court, damages being sought typically need to exceed $75,000.