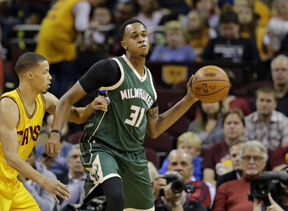 Milwaukee Bucks player John Henson said Tuesday that the owner of a Wisconsin jewelry store where he says employees racially profiled him apologized for what happened.

Henson said Thomas Dixon, owner of Schwanke-Kasten Jewelers in suburban Whitefish Bay, met with him at the team’s training facility. Henson said employees on Monday refused to let him in the store, then called police.

“He knew that shouldn't have happened,” said Henson, who is black. “He’d had some prior incidents but it still doesn’t make it right for them to do what they did. It’s a real issue today but right now, I want to focus on the game tonight and there will be time to talk about it later. I am going to do some things to raise awareness of situations like that and go from there.”

Henson posted an account of the encounter on Instagram, saying he intended to look at a watch at the store but that workers locked the door during normal business hours and told him to leave.

Henson said he was then questioned by police officers about the vehicle he was driving and what he wanted to purchase. He called what happened “degrading.”

Whitefish Bay Police said it had advised the store to call police if a Red Chevrolet Tahoe like Henson’s arrived there after one parked outside the store days earlier raised suspicions that its plates were stolen. The statement also said the store had previously been robbed and on Friday had closed down early after repeated suspicious calls about its closing time.

Officers were sent to the store Monday afternoon “as the Red Tahoe had returned,” the statement said. The officers talked to Henson, including questioning him about the dealer plates on his Tahoe, then requested that the employees open the door, it said.

Henson said in his post that the car was part of an endorsement deal with a Chevrolet dealer.

The officers who questioned Henson never asked for his ID and left the area after the store reopened, according to the statement.

“Nobody should be treated that way. We are trying to contact the store directly,” the statement said.

Calls to reach Dixon at his two Milwaukee-area stores were not immediately returned.

Dixon told WISN-TV that what happened was a misunderstanding that had to do with Henson's vehicle, not his race. He also later issued a statement to multiple local media outlets, saying that the business regrets how the encounter unfolded and that he wanted to apologize personally to Henson.

Dixon said in his statement Monday night, “We all agree that racial profiling is never acceptable and deeply regret how the circumstances unfolded.”

Henson didn’t intend for his social media post to go viral but was pleased that it drew attention to the bigger problem and hopes to use it as teaching tool.

“I tried to react the right way and get my message out without getting over-emotional,” Henson said. “There have been a few requests for me to come into schools and talk about what happened and help them understand how to react and how not to react.

“If I can keep this from happening to at least one person, then I felt like I’ve done my job as a player with a platform to say something. That’s all I wanted to do. It was a misunderstanding but nobody should ever have to deal with something like that.”

Bucks coach Jason Kidd said it will help Henson, his teammates and the community grow.

“For our young team, for our city, for our state; it’s something for us to learn from,” Kidd said. “Everybody makes mistakes, nobody is perfect. For the owner to come and apologize to John, personally, was a step in the right direction.

“It’s an issue world-wide, not just here in Milwaukee. He has to do a better of job of addressing it and also learning from it. Our guys here have learned a life lesson at a very young age.”

Henson was the 14th overall pick out of North Carolina in 2012. He signed a four-year contract extension with the Bucks earlier this month. 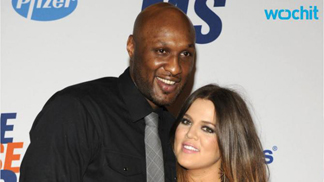 Former Los Angeles Lakers and Clippers forward Lamar Odom, who was found unconscious at a Nevada brothel, remained hospitalized in Las Vegas Wednesday, with ex-wife Khloe Kardashian at his side, while an investigation continued into allegations of drug use by the former NBA star. Odom, 35, suffered a medical emergency at the Love Ranch in Crystal, Nevada, where an ambulance was sent about 3:15 p.m. Tuesday, according to Nye County Sheriff Sharon Wehrly. Odom was taken to Desert View Hospital in Pahrump, which is about 20 miles south of Crystal, Wehrly said.

Odom arrived at the hospital at 4:16 p.m. Tuesday and arrangements were made to airlift him to a hospital in Las Vegas, but that wasn't possible due to the 6-foot, 10-inch man’s size, so he was taken by ground ambulance to Sunrise Hospital, Wehrly said. Wehrly said the sheriff’s office received a 911 call from two people at the brothel.

“During that call, the reporting parties informed the Nye County Sheriff's Office dispatch the male had been using cocaine,” the sheriff said

“They confirmed his usage on Saturday but was unsure if it had continued to the weekend. They also informed dispatch that he had used up to 10 tabs of sexual performance enhancer supplements over the last three-day period. He was unconscious but breathing. He had blood coming from his nose and his mouth, along with a white substance.”

Love Ranch owner Dennis Hof, whose brothel the Bunny Ranch is featured in an HBO reality series, said Odom was found unconscious in a room where he had been staying since Saturday.

“We called 911, my staff did,” Hof told “Entertainment Tonight.”

“They said, ‘Roll him on his left side’ and he started throwing up a lot but he was breathing. Then the ambulance and the police came and took him to the (hospital). They said he was in bad shape and they thought he might not make it.”

In an interview with K-News 94.3 radio in Palm Springs, Hof said of Odom, “It doesn’t look good. It doesn’t look good at all. He was taking a lot of herbal Viagra supplements.” Hof told the station he did not see any evidence of cocaine use by Odom, and suspected it was the herbal supplements that caused the problem.

“He was sleeping while he was there,” Hof told the station. “He had an appetite. He was eating everything in the kitchen.”

Wehrly said sheriff’s detectives obtained a search warrant allowing them to collect a sample of Odom’s blood. That blood was drawn early Wednesday morning, but it has not yet been tested by the Las Vegas Metropolitan Police Department laboratory. The celebrity website TMZ.com, citing witnesses at the hospital, reported that Odom had cocaine and opiates in his system. Doctors have said the fluid found in Odom's lungs was the result of crack cocaine use, TMZ reported.

Odom appeared with Khloe Kardashian on “Keeping Up with the Kardashians” and in a spinoff series, “Khloe & Lamar,” in 2011 and 2012. Although Odom and Khloe Kardashian are divorced, the couple have remained close. On her reality series, Kardashian has made repeated references to her continued affection for Odom and concerns over his past struggles with addiction.

The couple were married for about four years. Various media outlets reported that although the couple signed divorce papers earlier this year, the paperwork has not yet been processed, meaning the couple are technically still married. Laker Kobe Bryant and the Rev. Jesse Jackson were among those visiting Odom at the hospital. 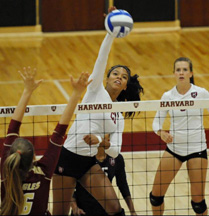 A new addition to the Harvard Crimson women’s volleyball team has been making waves and garnering attention from the University and the Ivy League conference. Freshmen middle blocker Christina Cornelius has been honored for her offensive and defensive prowess during her first month of collegiate gameplay.

Cornelius, a Los Angeles native, wanted to attend a school with a positive reputation in academics and athletics.

“Since I’ve been here, that’s exactly what I’ve gotten,” said Cornelius. “I’ve gotten to be with a great team and also work super hard and play at a high level, but also in the classroom, I’ve got to meet great professors and great students.”

During her inaugural season, Cornelius had a series of career highs that complemented the team’s conference title run last season with 17 kills, 6 digs, and 41 attacks, according to Harvard Athletics.

“I always want to win, I’m very competitive,” said Cornelius. “I am ready to achieve the same goals this year, work as hard as I can to give as much as I can to the team.”

Cornelius’ hard work recently earned her Ivy League Rookie of the Week, according to Harvard Athletics. Getting the honor was a goal of Cornelius’.

“Being able to get that award so early was awesome,” she said. “It shows that what I’ve been doing so far is positive.” 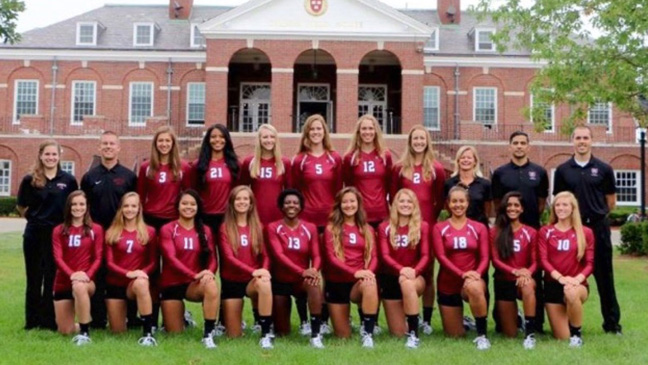 A role model and major influence for Cornelius is her grandfather Don Cornelius, the creator of the hit TV show Soul Train.

“When people thought that he couldn’t do something, he didn’t listen, he did what he believed is right,” said Cornelius. “From his success and all of his accomplishments, it shows that believing in yourself and doing what you think is right and working hard will lead you to success.”

Cornelius said there is a good sense of comradery among the team. The players give each other compliments along with constructive criticism. Cornelius plays with an air of equanimity, occasionally getting excited.

“On most of my teams, they call me the rock of the team,” she said. “I don’t really get rattled by pressure that much and I feel like I’m a calm presence on the court.”

After trying basketball and track at a young age, Cornelius said she began playing volleyball at 12 and played for the Mizuno Long Beach volleyball club.

During her senior year at Windward high school, Cornelius was captain of the volleyball team and earned Dean’s list honors. She also earned a spot on the California Interscholastic Federation first team in both 2013 and 2014, according to Harvard Athletics. Transitioning to collegiate level gameplay is “a learning experience” according to Cornelius.

“These girls have more experience playing collegiate volleyball,” she said. “You actually see how they work and see how they balance school and sports.”

Although the team suffered a loss by Darmouth on Sept. 25, they rallied back last weekend by defeating Princeton and Penn giving the Crimson a 2-1 conference record.

“The pain of losing is worse than the happiness you get when winning because you put so much out there and getting it taken away from you is an awful feeling,” said Cornelius. “We’re a bunch of fighters and we’re very, very competitive.” 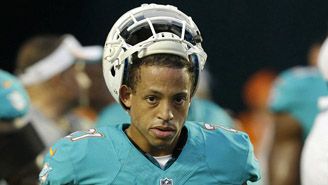 Miami Dolphins cornerback Brent Grimes says he’s concentrating on football in the wake of his wife’s arrest outside the stadium before the team’s most recent game.

Miko Grimes is scheduled for arraignment Oct. 27 on charges of disorderly conduct, battery on a police officer and resisting arrest with violence. She was arrested Sunday while walking in the stadium parking lot, and police say she disobeyed an officer’s command to stop, became combative and head-butted an officer.

“Miko is fine,” Grimes said Wednesday, talking publicly about the incident for the first time. “I really don’t want to talk about Miko. That will handle itself.”

When asked if the matter was a distraction for him, Grimes said no.

“I’m good. Stuff will happen, but you have to focus on your job,” he said.

The Dolphins will try to bounce back from a 41-14 loss to Buffalo when they play Sunday against the Jets in London.