Jamaicans provide some smiles in the 200 at worlds 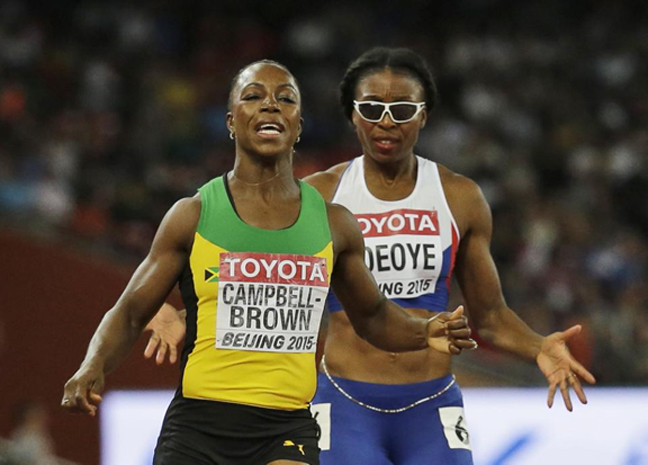 Racing in a lane next to one of the big-name Jamaicans sure was a laugh.

They certainly brought a few smiles to the sprints Wednesday night at world championships. Usain Bolt was already chuckling with the runner next to him before he crossed the finish line in the 200 meters.

Another of the country’s champions, Veronica-Campbell Brown, was up to a different sort of hijinks, veering out of her lane and into the one next to her after she rounded the turn in her 200 heat.

No damage done in either race.

Bolt won his heat easily in 19.95 seconds, beating out South Africa's Anaso Jobodwana, who has now run next to The World’s Fastest Man in three straight major championship semifinals.

“Usain Bolt is a living legend,” Jobodwana said. “I was smiling to be so close to him.”

And Campbell-Brown advanced to the next round, as well. She was not disqualified for veering from Lane 5 to Lane 6 because she didn’t impede the lane’s rightful owner, British runner Margaret Adeoye.

“I was like, ‘Was that me or was that her?’” said Adeoye, who finished third in the heat to advance. “It helped me get to the finish line.”

Campbell-Brown, the woman known simply as “VCB” back on the island, grimaced as she realized she was changing lanes. It's not like her, and it could have cost her dearly. She's a two-time Olympic gold medalist in the event, and this might be her last, best chance at a second world title. Two of the best runners at the distance — Shelly-Ann Fraser-Pryce and Allyson Felix — are sitting this one out.

Asked to explain her meandering ways, Campbell-Brown only said she had a headache, before making a quick right turn to head to the practice track.

She’ll return Thursday, along with Bolt, where the running will get more serious.

Campbell-Brown is in the semifinals and Bolt will race in the final, in another sprint showdown with Justin Gatlin.

While Gatlin ran 19.87 — the second-fastest semifinal in the history of world championships — Bolt shut things down early and finished in 19.95.

In the midst of decelerating, Bolt turned back to share a smile with Jobodwana, who ran hard to the finish and still couldn’t catch up.

All three times he’s run next to Bolt, Jobodwana said, he’s “been right next to him and kind of making him run, even though he really wasn’t running.”

Chances are, Bolt won’t share any smiles with Gatlin until well after Thursday’s race is over.

“It’s all about focus now,” Bolt said. “Getting focused and showing the people that when it comes to the big time, I always show up and get things done.” 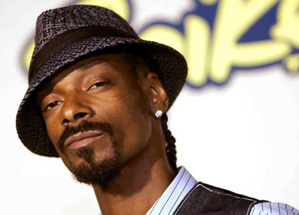 Snoop Dogg was one of many celebrities present for this past weekend’s Athletes vs. Cancer Celebrity Flag Football Game in Los Angeles, Calif. The event was set up to raise money for the charity in memory of in memory of Memphis Grizzlies star Matt Barnes’ mother, Ann Catherine Barnes, who passed away in 2007 after being diagnosed with cancer.

During the event, Snoop Dogg took some time to sit down with Campus Sports to discuss a number of topics including what the charity means to him, the creative way the fund raises money, the future of his son Cordell Broadus and much more.

“Three years ago, [Matt Barnes] decided to do it and I wanted to step up with him in representation of L.A., USC, UCLA,” Snoop said. “So we did it, did it two years in a row, and then when my son got a scholarship to UCLA I said, this year we’ll just go USC vs. UCLA.

“The whole event is a clever event that Matt Barnes put together with his team to bring some awareness; all these athletes, celebrities and entertainers, we come out to support it because we all have lost someone to cancer. And we all feel like we want to find a cure and bring some awareness.”

After mentioning his son’s influence on the theme for this year’s game, Snoop Dogg commented on his son’s future. It had recently been reported that Cordell Broadus decided to leave the UCLA football team in order to pursue a new career in film.

What kind of advice did his father have?

“[I told him to] be all that you can be in life. Play the game of life like you played the game of football,” Snoop said he told his son. “Play it hard, with passion. Be serious about it. Be studious. Be humble, and strive to be great.” 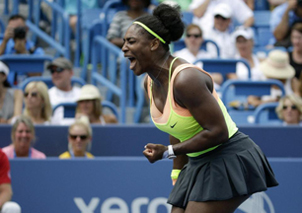 Serena Williams pumped her fist after each important point and screamed as she smacked another emphatic shot. The defending Cincinnati champion wasn’t going to ease into the tournament.

Williams put a lot of emotion into her opening match at the Western & Southern Open on Wednesday, a 7-5, 6-3 victory over Tsvetana Pironkova that made her the first of the top seeds to advance.

Williams won the Cincinnati tournament for the first time last year, getting one of the few titles that had eluded her. This year, she's using it as a final tuneup for the U.S. Open, where she'll be the focus as she tries to complete a rare Grand Slam sweep.

For her, this week is about getting her game ready to take a swing at history.

“I think it could be a lot better,” she said. “It’s not where I would want it ideally, but, you know, I’m going to have to fix that more mentally than anything. I think once I lock in there I will be OK.”

She’s already starting to get locked in on New York by limiting her responsibilities away from the court.

“I don’t necessarily want to hear about, ‘Oh, this history and that history,’ because I just want to be able to do the best that I can. I want to be able to win and I don’t want any distractions. That’s how I’m going to handle it.”

The top-ranked Williams was coming off a loss to Belinda Bencic on Saturday night in Toronto in the Rogers Cup semifinals.

The start of the day’s matches was delayed 35 minutes because of rain, which fell again shortly after Williams completed her win.

Her sister, Venus, dropped out of the tournament Tuesday night with an illness. Maria Sharapova also dropped out with a lingering injury to her right leg.

On the men’s side, Djokovic waited out a long rain delay before his match started, and then wasted chances to close it out quickly. He converted only 5 of 15 break points during the match. The first set lasted 64 minutes.

Djokovic has never won in Cincinnati, losing the finals to Andy Murray in 2008 and 2011, and to Roger Federer in 2009 and 2012. A title this week would make him the first player to win all nine ATP Masters events.

Fourth-seeded Stan Wawrinka rallied for a 3-6, 7-6 (3), 6-3 win over Borna Coric. The French Open champion didn't take control until he broke Coric's serve in the sixth game of the third set and then held for a 5-2 lead. He will meet Ivo Karlovic in the third round.

Twelfth-seeded Richard Gas­quet survived a first-set tiebreaker and advanced with a 7-6 (5), 6-2 win over qualifier Thanasi Kokkinakis. Gasquet will face seventh-seeded Marin Cilic in the third round. 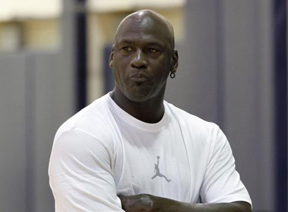 Michael Jordan’s lawyer told jurors on Wednesday August 12, at a civil trial over the unauthorized use of the star’s name in a steak ad that the market value of Jordan's moniker to the Nike sportswear company was at least $480 million. Each commercial use of Jordan’s name is worth more than $10 million, he estimated.

The price tag on Jordan’s name is the central issue for jurors who will decide how much Dominick’s Finer Foods should pay in damages for a 2009 Sports Illustrated ad that congratulated the basketball legend by name on his Hall of Fame induction. The ad also included a $2-off coupon above a photograph of a sizzling steak.

During opening statements at the federal courtroom in Chicago and with Jordan looking on from a plaintiff's table, his attorney began by listing his client’s accomplishments, including six NBA championships with the Bulls.

“What’s Mr. Jordan’s most valuable asset? It’s the use of his identity,” Frederick Sperling said.

Later in the day, one of the plaintiff's first witnesses – Estee Portnoy, a marketing executive hired by Jordan – described how her boss meticulously guards his image. She was shocked, she said, when she saw the Dominick’s ad, which includes the text, “Michael Jordan ... You are a cut above.”

“It compares Michael to a piece of steak,” she testified.

Jordan, 52, is also on the witness list for the trial, which is expected to last about a week.

During his opening, Sperling displayed a chart with companies whose products Jordan has endorsed and how much he made from each deal. It included the $480 million from Nike from 2000 to 2012 and $14 million from Hanes underwear. Sperling added that Jordan made a total of $100 million from his identity in 2014, a decade after retiring as an NBA player.

The ad wasn’t a success, with just two people redeeming the steak coupons from the now-defunct Dominick’s, court documents say. In his remarks to jurors, Sperling broached the question of why Jordan would devote so much time and money to suing the grocery-store chain now.

Because, he said, “if you don’t protect the use of your identity, then your value disappears.”

Dominick’s acknowledged it wasn’t authorized to invoke Jordan's name, so the sole issue for jurors is how much to award Jordan in damages.

In his opening, Dominick’s lawyer Steven Mandell suggested that plaintiff's attorneys overvalued Jordan’s name. It might be worth $10 million in some contexts, he said, but not necessarily in a one-off ad.

“The more you use, the greater the value,” he said.

Bu Sperling likened Dom­inick’s use of Jordan’s name to someone cutting into the feed of a cable company with 250 channels to watch just one channel. Then, after he’s caught, he offers to pay for one channel only.

Dominick’s reasoning, he said, is that “if a thief steals something and doesn’t do much with it, he doesn’t have to pay much.”