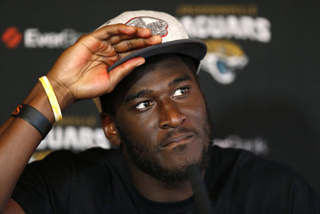 Nearly two years after Justin Blackmon’s last NFL practice, the Jacksonville Jaguars have all but given up on the suspended receiver.

General manager Dave Caldwell said Tuesday he’s pretty much lost hope Blackmon will return. Caldwell hasn’t had any contact with Blackmon in some time and believes the former Oklahoma State star’s skills would be diminished if he was reinstated by the league.

The NFL suspended Blackmon indefinitely in November 2013 after repeated violations of the league's substance-abuse policy.

“Realistically, I think when you’re away from the game (this long), what you were once is not what you probably will be,” Caldwell said from his office Tuesday. “Your skills do erode, especially if you’re not staying in tip-top shape and you’re not in football shape.”

In December, the Jaguars felt pretty good about Blackmon potentially returning. He had been getting professional help at a treatment facility, and Caldwell said he was “hearing good things.”

But then the Jaguars stopped getting updates about Blackmon, and pictures surfaced on social media sites earlier this year in which Blackmon appeared significantly heavier than his playing weight.

“I don’t know what to expect, but I would say common sense would probably be if you haven’t played football in 2 ½ years, apparently that's not a priority for you,” Caldwell said.

The Jaguars have mostly moved on.

They drafted receivers Marqise Lee and Allen Robinson in the second round in 2014 and then added Allen Hurns as an undrafted free agent The trio combined to catch 136 passes for 1,647 yards and nine touchdowns as rookies.

Since Blackmon’s suspension, Caldwell had viewed any chance of his return as a luxury. Now it’s more of a long shot, at best.

The Jaguars could part ways with the fifth overall pick in the 2012 draft, but keeping him on the roster presumably could give someone in need a little hope. It also gives the Jaguars the first opportunity to evaluate Blackmon if he ever is reinstated.

Blackmon caught 29 passes for 415 yards and a touchdown in the four games he played in 2013 and was the team’s leading receiver during that stretch. He has 93 catches for 1,280 yards and six scores in 20 career games.

But his problems have overshadowed his play. A record crowd of fans watched 6,500 athletes from 165 nations march into the Los Angeles Coliseum for the opening ceremonies of the Special Olympics World Games on July 25.

The gathering was the largest single event ever held at the Coliseum, surpassing the 1984 Olympic Games.

Athletes with intellectual disabilities entered the stadium prior to the lighting of the Olympic Torch. First Lady Michelle Obama was there to officially open the games. 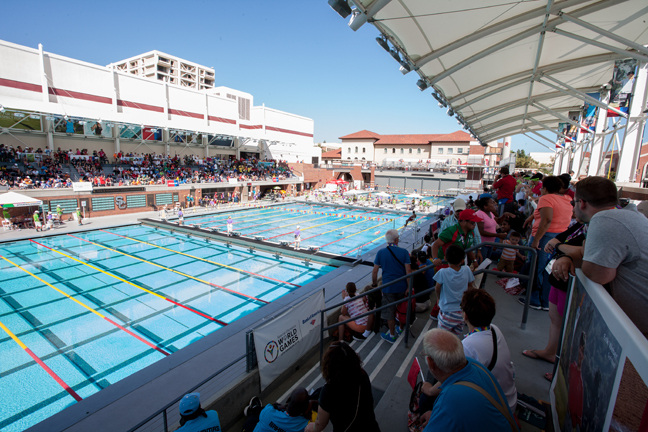 “My husband and I, we are so proud of you, so incredibly proud of you, and we love you all from the bottom of our hearts,” she said.

The Special Olympics takes place every two years, with athletes coming from all over the world. 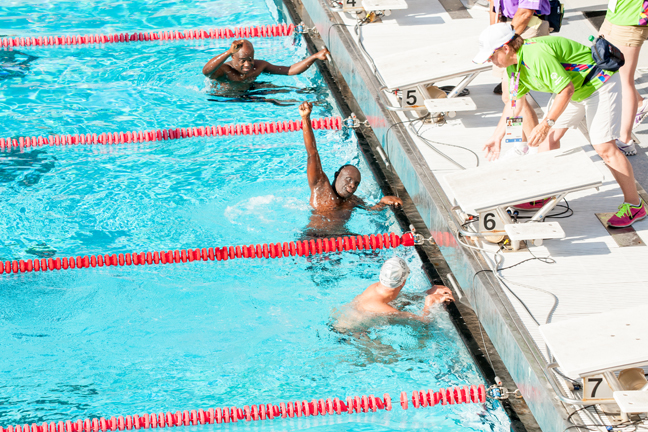 Athletes will be competing in 25 different sports at venues throughout Los Angeles, including USC and UCLA.  Local corporations, community groups, families and friends joined in to welcome this year’s athletes to Los Angeles and to celebrate the true meaning of sportsmanship. Bank of America was one of the leading corporate sponsors of the event and a large contingent of B of A employees, family and friends were on hand to show their support and share in the experience of the games.

“We are thrilled as a company and as Angelinos to participate in the world’s largest sporting and humanitarian event in 2015. The 2015 World Games has brought unprecedented awareness to the importance of inclusion and to the tremendous abilities of those with intellectual and physical disabilities,” said Gwen Givens-Jones, Business Banking executive and co-chair of Bank of America ‘s employee volunteer network for Los Angeles.

“I personally volunteered, along with nearly 4,000 of my Bank of America colleagues to help make sure the region was prepared for such a gathering. The coalescing of our company employees and the community with these athletes, coaches and families has been a truly remarkable experience for all of us.” Councilmember Curren Price who’s 9th District houses both USC and the Los Angeles Memorial Coliseum had this to say about the event.

“What an exciting time for our city – to play host to the Special Olympics World Games. As the largest event hosted by Los Angeles since the 1984 Olympic games, this is a great honor for the city as we do our part to help raise awareness for acceptance and tolerance of all.” “This is an amazing time in both our city and throughout the state,” he said.

“The spirit of these games the athletes and the supporters of the Special Olympics World Games are a true demonstration of what our community and the residents of our city reflect.  It is both an honor and a privilege to host the world here in my district and throughout the great city of Los Angeles.”

The closing ceremonies will at the Coliseum on Sunday, August 2. The final festivities will pay tribute to the athletes, families, coaches, volunteers and supporters.  World-class entertainers and celebrities will headline the celebration. 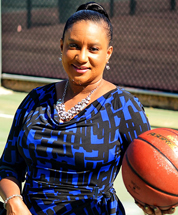 Nix is no stranger to rendering service within the local communities having previously served as Assistant Vice President of Global Marketing and Corporate Affairs for Bank of America – Merrill Lynch.  A recipient of numerous community awards Nix is “thrilled and honored to be a part of the Laker family.”  “To think that I grew up loving the Lakers, going to the Laker parades and now I am a part of this amazing organization whose commitment to the Los Angeles community is strong and enduring.  I am truly grateful for the opportunity to serve.  I really have to pinch myself.” Nix said. The mission of the Los Angeles Lakers Youth Foundation and Nix’ passion for mentoring youth are a match made in heaven.   “Mentoring young people is one of my greatest passions.  I believe in the adage that it takes a village and we have amazing partners who support the Foundation’s efforts and are an integral part of what we do in promoting health and wellness through sports for undeserved youth.   I look forward to working with our partners and establishing new relationships within the local communities.”

As accomplished as Nix is and her accomplishments are many… recipient of the Single Mom Planet’s Humanitarian Award, the corporate leadership award from the Regalettes, Inc., named one of Los Angeles 100 Most Prominent & Influential African Americans by the National Action Network, member of the USC Black Alumni Association Advisory Council, the Dodgers RBI Advisory Board, St. Mary’s Academy (Inglewood) Board of Directors and recipient of the Lifetime Community Service Award and the Global Diversity & Inclusion Award from Bank of American-Merrill Lynch, she considers her son, Fisk University college senior Kyler Franklin her greatest achievement.  “Being a single mom is so rewarding and challenging but I am extremely proud of Kyler and the young man that he has become.  He is a great human being… a wonderful citizen of the world.  Being his mom is what I am really grateful for and proud of.”

When asked what is one nugget that she would pass on to single mothers, Nix responded without hesitation, “ask for help…you can’t do everything on your own.  Involve others who can impact your child’s life in a positive way.  It’s not a bad thing to say I need help.”

Written by Nicholas A. Norman 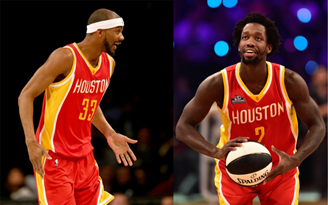 By Nicholas A. Norman

Special to the NNPA from the Houston Forward Times

As most expected, the Rockets decided to bring the band back together, signing Patrick Beverley and Corey Brewer to multi-year deals over the holiday weekend.

Considering signing LaMarcus Aldridge was a pipe dream — and a rather expensive one at that — this was really the only logical move for Daryl Morey this offseason. No point guard on the free agency market fits the Rockets better than Beverley, and there might not be a bench wing on earth who fits the Rockets better than Brewer. He was indispensable in the playoffs, and Beverley was missed.

It sure helps that they’re both so cheap, too. Beverley is back at four years, $25 million with the last $5 million unguaranteed. Considering Cory Joseph just got paid $5 million more and might be a Spurs-ian illusion, this is an incredibly fair contract. Next year when the salary cap is close to $100 million and the Rockets have a 27-year-old point guard who plays haranguing defense and can knock down open three-pointers making a shade over $6 million, Morey will look like a genius. Again.

Corey Brewer will be making more, entirely deserved, money. He signed a three-year, $23 million deal, which, again, at less than $8 million a year, will be a steal next year. Heck, it’s a steal this year, because he was able to take over games for stretches against opposing bench units and score single-handedly in the fast break. I argued he should have won Sixth Man of the Year, and had he played the whole season in Houston, he might have taken it home. He should be a leading candidate for the award next year.

Next year, the two will combine to make roughly $14 million a year, or $1 million less than Chandler Parsons. Corey Joseph is making $5 million more over the course of his deal. Al-Farouq Aminu is making just as much as Brewer. In the current market, Morey got his role players to take discounts. There are event reports out there that Jason Terry wants to come back, and the Rockets are as yet unwilling to sign him (not a bad decision).

Since the Rockets haven’t renounced the cap holds of Josh Smith and Jason Terry, as far as I can tell, meaning they’re still $8 million over the cap, according to Spotrac’s cap tracker, the only way they can sign Smith is if he signs for pennies on the dollar contract and sign K.J. McDaniels for a part of their mid-level exception (he’s not taking a David West discount).

So the team is largely back together, save for the last few pieces, but the roles will slightly change. Sam Dekker will find some minutes, Donatas Motiejunas figures to get at least 30 minutes of run a night, Clint Capela deserves to play more and Terrence Jones, if he’s still on the team, will have a chance to prove he can still make a positive difference after another horrific playoff performance.

Morey has his last few moves to make. He needs to sort out the McDaniels/Smoove situation, and it still seems he has a trade to make. He has Kostas Papanikolaou’s contract, Terrence Jones, four young assets in Nick Johnson, Clint Capela, Sam Dekker and Montrezl Harrell and future picks. The Rockets may be over the cap, but they are far from inflexible.

There is still so much offseason left. Almost all of the major free agents have signed, yes, but don’t forget three years ago, when just days before training camp started Morey pulled off the most lopsided trade in the last decade and landed Houston an MVP. We know he will continue to work the phones, and find ways to improve.

Although Nick Johnson showed promise last year as a defender and has A-plus athleticism, with Beverley’s injury history, the Rockets simply must add another point guard. Who knows if Pablo Prigioni can hold up (his contract is unguaranteed, but very cheap) to another full season? Same goes for Jason Terry. It’s conceivable neither or both of them could be back next year.

No matter what moves Morey makes, his first two were both quiet successes. The game’s best GM is just humming along, knowing he has a contender in his hand with cards still to play.