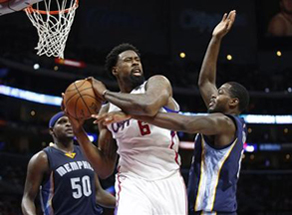 The Los Angeles Clippers made a last-ditch push Wednesday to keep DeAndre Jordan after the free agent center had second thoughts about his agreement to join the Dallas Mavericks, people with knowledge of the situation told The Associated Press.

Jordan and the Mavericks agreed to terms on a four-year, $80 million contract last Friday. The Clippers can offer a five-year deal worth even more once contracts can be signed starting Thursday — and Los Angeles put together a full-court press to keep Jordan with the only team he has ever played for over seven NBA seasons.

The Clippers sent a contingent to Houston to make a personal pitch to Jordan, a group that includes Blake Griffin and Paul Pierce, according to a person with knowledge of the plan. The person spoke on condition of anonymity because he was not authorized to discuss the details.

Mavericks owner Mark Cuban was already in Houston to try to persuade Jordan to stick with his commitment to the Mavericks, according to a second person who spoke to AP also on condition of anonymity because of the secrecy of the team's plans. Jordan is a Houston native who played at Texas A&M.

Losing Jordan could be a blow to the Mavericks’ hopes of winning their first playoff series since taking the franchise’s first championship four years ago. It could also lead to a debate about the effectiveness of the NBA’s moratorium in free agency.

The ban on signing deals for about a week and a half after the start of free agency was put into the labor agreement in an attempt to stop tampering, but instead has created the possibility of players having second thoughts.

Dallas lost point guard Jason Kidd to the New York Knicks in 2012 after he initially agreed to return to the Mavericks, who ended up missing the playoffs that season for the first time in 12 years.

Jordan has led the NBA in rebounding the past two years and is coming off career highs in scoring and rebounding at 11.5 points and 15.0 rebounds per game. He helped the Clippers get within a victory of the Western Conference finals for the first time, but a second-half collapse at home in Game 6 was followed by a loss in the deciding game at Houston.

“We had one priority this summer, and that was to re-sign D.J., and we missed out on that,” Redick said. “So barring some miracle, (the) makeup of our team is completely different now.”

The Mavericks, who lost to the Rockets in the first round, also have a four-year agreement with free agent shooting guard Wesley Matthews, though the value of that deal is expected to depend on whether Dallas lands Jordan.

The unusual last-minute lobbying played out on Twitter with various players tweeting emojis with apparent references to traveling to Houston to meet with Jordan.

Dallas forward Chandler Parsons, who played a crucial role in getting the original commitment from Jordan, tweeted an emoji of an airplane. Griffin sent one with the same plane, plus a helicopter and a car. Clippers point guard Chris Paul had a tweet of a banana and a boat, apparently a joking reference to his recent vacation with LeBron James, Dwyane Wade and Carmelo Anthony. Paul wasn’t with the Clippers for their first meeting with Jordan last week.

The barrage of tweets prompted Kobe Bryant to weigh in with “Emoji battle?” — and adding five trophies for his five titles with the Lakerspt. The Golden State Warriors, still less than a month removed from winning the NBA title, offered one showing a trophy. 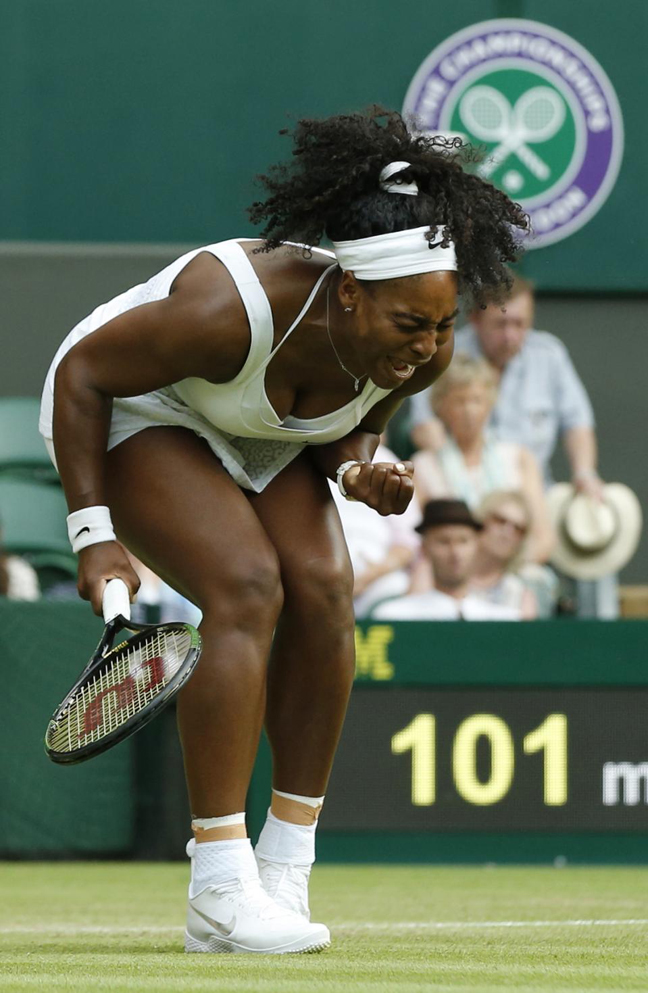 Venus Williams is no longer the player she once was, on account of the passage of time and the day-to-day ups and downs of an energy-sapping condition.

At age 35, 21 years removed from her first professional tournament, Williams still possesses a dangerous serve, along with the muscle memory that comes with seven Grand Slam singles titles, five at Wimbledon.

And so while it is her younger sister Serena who is ranked No. 1, has 20 major titles and owns a 23-match Grand Slam winning streak as of Wednesday, the elder Williams is still in the draw at the All England Club, too — and the siblings are closing in on what would be their 26th all-in-the-family matchup on tour.

“She probably comes back here and, you know, I think, she almost feels like this is home,” said David Witt, Venus’ coach. “When you have confidence, you have everything. That’s with any sport. And I guess when she gets here, it’s a confidence thing.”

Two more wins, and the siblings will meet in the fourth round.

“She poses a big threat for me,” Serena said about Venus.

They pulled out of doubles on Tuesday, citing “soreness” for Serena, who wants to focus on her pursuit of a fourth consecutive Grand Slam title.

Also advancing: No. 21 Madison Keys, who finished off a match suspended because of darkness at 2-all in the third set a night earlier, and Sloane Stephens.

A pair of U.S. men moved on, too: No. 17 John Isner and 105th-ranked wild-card entry Denis Kudla, who followed up his victory over No. 28 Pablo Cuevas by getting past 18-year-old Alexander Zverev.

Spectators fanned themselves in the stands and used everything from hats to umbrellas to towels for shade. A ball boy collapsed during Isner’s match and was taken away on a stretcher. One player, No. 27 Bernard Tomic of Australia, said he felt dizzy during his victory. Others, including Mattek-Sands, wrapped towels filled with ice around their necks during changeovers.

“It’s definitely hot, but nothing crazy. We have played in worse. I think it’s just surprising because it's happening in England, where it usually doesn’t,” Keys said. “We have played through much worse.” 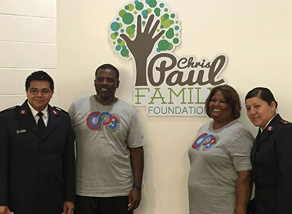 The Chirs Paul Foundation and the Clippers Foundation collaborated to renovate a community center in Compton. The Salvation Army Compton Corp Community Center just had a grand opening of their Read to Achieve Live, Learn and Play Center.

“My family and I have always given back to the community. From the time I was a child my parents instilled in my brother and I the importance of being a part of the community by sharing what we have,” Chris stated. “Since I joined the NBA, we have shared our blessings in the cities where I have played. Now that I am in Los Angeles the Clippers Foundation and I have joined forces to do our part to support programs that help motivate young to dream and reach higher. The Salvation Army Community Center in Compton is one of those programs.”

“I am so excited for this event today,” said Robin. “This does my heart good to see these kids as they go around to these different rooms and see the new stuff and see the difference that some of us are trying to make in their lives. That is really what the Chris Paul Family Foundation is all about.” 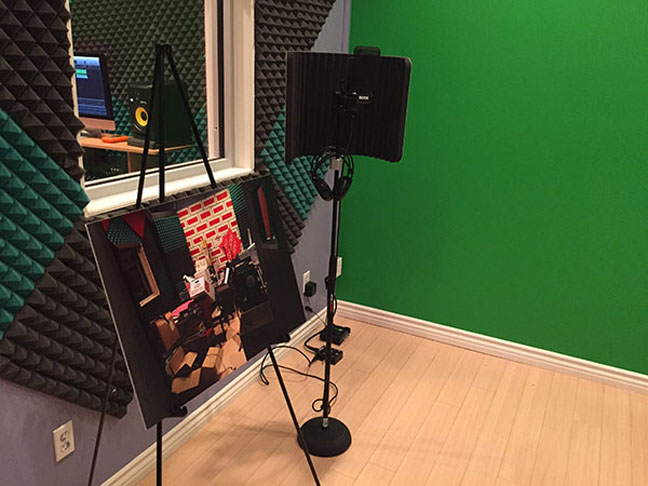 At the ceremony, community members were able to tour the facilities. In every renovated room, there was a photo showing how room looked before. Renovated rooms include a video/sound studio, game room, and outdoor activity area.

On the walls of the refurbished rooms are words in frames. Words include perseverance, dedication, think, and discover. The words are meant to encourage the students, according to Chris.

The California State Assembly presented the Salvation Army Compton Corps Community Center and both foundations with commendations for the project.

“Sometimes we are forgotten over here in the city of Compton,” said Michelle Chambers, a field representative for Assemblymen Mike A. Gipson. “Thanks to these organizations and these wonderful foundations, our children have a place to find safe refuge for literacy.”

Chris Paul started the CP3 foundation during 2005 in honor of his late grandfather. The foundation would give scholarships to high school students to attend Wake Forest University, the alma Mater of Chris, according to the Los Angeles Clippers.

Washington regrets having to walk away from Rangers job 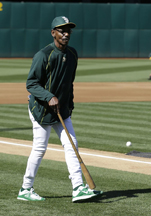 Ron Washington sat in the opposite dugout from the one he used to manage the Texas Rangers, still with his ever-present passion for the game while talking about his role with the Oakland Athletics.

Washington was excited this week to be back in the stadium where he twice led the Rangers to the World Series in his eight seasons as their manager. He loves being back in the majors as a coach and infield instructor.

He also hopes to manage again one day, and regrets that he had to leave his Rangers job late last season.

Washington is a month into his new job with the Athletics, where he spent 11 seasons before becoming the Rangers manager.

Washington said the big picture and his day-to-day outlook right now is the same, to keep Oakland infielders thinking, believing and working right.

While he can be in uniform, he can’t be in the dugout during games.

Washington spent his time out of baseball working with youth and college players in his native New Orleans, and he went to Italy to do a clinic for coaches. He also put in a garden, did work at his home and spent time with Gerry, his wife of more than 40 years.

“She’s great. Personally, we’re fine,” Washington said. “I’m happy, you know what I’m saying. Not that I was unhappy but, right now, I’m in a good place.”

And the 63-year-old Washing­ton would like to get the chance to manage again.

“I can help a team. I can direct a team,” he said. “That’s going to be up to a general manager and ownership, I think my credentials are out there, just see what happens.”