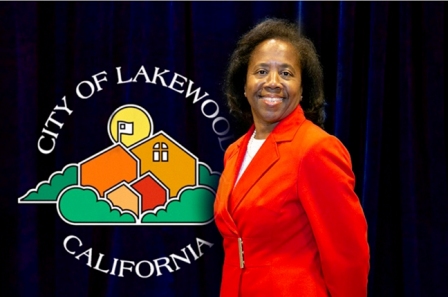 A longtime Lakewood city commissioner and former Los Angeles County sheriff's commander was sworn in today as the first Black council member in the city's history.

Vicki Stuckey was unanimously appointed Tuesday night to fill the 18 months remaining on the term of Diane DuBois, who retired after 15 years on the Lakewood City Council.

Stuckey – who has lived in Lakewood for 28 years – has been a city commissioner for 19 years, served four years on the community safety commission and 15 years on the planning and environmental commission, including four stints as the commission's chair.

She retired last year from the sheriff's department, where she worked 34 years and rose through the ranks from a deputy to a sergeant, lieutenant and ultimately a captain and commander of the Altadena sheriff's station.

“I think Vicki Stuckey is a great choice for serving Lakewood, especially at this unique point in our history,” Mayor Todd Rogers said in a statement released by the city.

“As we all know, Lakewood continues to diversify, and I think it is important that we have a variety of perspectives and life experiences represented at the highest levels of decision making ...,” he said. ``I think she can step right in and hit the ground running to effectively serve out the remainder of Diane DuBois' seat at this important time for our city.”

DuBois had previously served 28 years on the city's planning and environmental commission, making her the Lakewood resident with the longest combined service as a city official in Lakewood's history.

Last month, she said she was “ready to retire, relax a bit and give someone else a chance to sit in this seat.”

On Wednesday, Stuckey said she is “honored and humbled to have this opportunity to serve my fellow residents of Lakewood.”

“I look forward to devoting myself to being the best council member possible, representing everyone in our community and working with my colleagues and fellow residents to keep our city in great shape and make it the best it possibly can be,” she said.

The City Council had the option of filling the vacancy by appointment or holding a special election in March 2021 that would have cost the city about $230,000, officials said.

The department says the cameras will be deployed next month and in the meantime, deputies will be trained on how to use them.

“This will help strengthen our bonds of trust and bring increased transparency,'' the sheriff's department said on Twitter Wednesday afternoon.

The board had already set aside $35 million for the cameras without releasing that money to the department. Supervisors Janice Hahn and Kathryn Barger co-authored a motion calling for a transfer of funds sufficient to cover the first year of operations.

“Body-worn cameras are an important tool for transparency and I have been advocating to get them to our sheriff's deputies since Sheriff Jim McDonnell was in office,'' Hahn said. “The videos these cameras capture will give us a clearer understanding of what actually happens in the interactions between our deputies and members of the public.''

The first pilot of body cameras by the Sheriff's Department in 2014 predated Hahn's election to the board, as well as Sheriff Alex Villanueva's tenure. The sheriff has blamed his predecessor and the board for spending too much time reviewing the problem and potential solutions, while board members have pointed out that the sheriff has had control of the procurement and implementation process. It is just one of many public disagreements between Villaneuva and the board.

Hahn said the transfer would allow the department to move forward without any “extra red tape.”

The value of video footage couldn't be clearer at a time when protesters nationwide have been enraged into action by the images of George Floyd, a 45-year-old Black man, fighting to breathe while held down by the knee of a white Minneapolis police officer now charged with murder.

“These body-worn cameras, they don't solve everything, but they put a lot of things in perspective,'' Supervisor Mark Ridley-Thomas said. 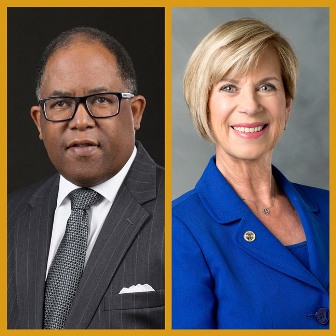 The Los Angeles County Board of Supervisors voted today to consider restructuring the agency that manages hundreds of millions of dollars to fund dozens of initiatives aimed at curbing homelessness.

In a motion pointing to the results of a recent audit of the Los Angeles Homeless Services Authority, Supervisors Mark Ridley-Thomas and Janice Hahn said a new governance model may be needed.

“LAHSA was created before homelessness reached crisis proportions, and while it has bulked up personnel and scaled up operations in recent years, its governance model has remained stagnant,'' Ridley-Thomas said in a statement.

“Perhaps it is time to explore new governance models with the goal of ensuring that we are best serving the thousands of homeless individuals and families who need help.''

Though the motion did not specify just what solutions might be proposed, Hahn offered some ideas of her own.

“I have not been shy about my criticism about LAHSA and its current structure and I just feel like it's not working as well as we need it to,'' she said. “Sometimes it's too bureaucratic, it's too slow, it's too resistant to change.''

Hahn said she is not alone, and that many city and community officials complain about the agency and feel that LAHSA is more responsive to the city of Los Angeles than their local problems.

She suggested that solutions could include breaking up LAHSA into two entities, one that serves Los Angeles alone and the other covering the balance of the county. Another idea she promoted was a subregional system with separate agencies covering a handful of geographies.

“If we all decide that we like keeping LAHSA in place, we could structure the current commission to look more like our Metro board, where there is more regional representation that could be added, as well as our directors of public health, mental health and health services,'' Hahn said.

She acknowledged that LAHSA was set up as a part of a legal settlement and any change in structure would require the consensus of Los Angeles and federal housing officials.

The agency has already gone through a major leadership change, with CEO Peter Lynn stepping down in December after five years at the helm. Heidi Marston, the acting executive director, was formally appointed to the role in June after a nationwide search.

The chair of the LAHSA commission said in June that Marston was up for the challenge.

“Heidi Marston is the exact person we want to reform an entrenched system – she's brave, energetic and unflappable. She has a commanding mastery of the details of how a bold homeless services system should work,'' LAHSA Commission Chair Sarah Dusseault said then. 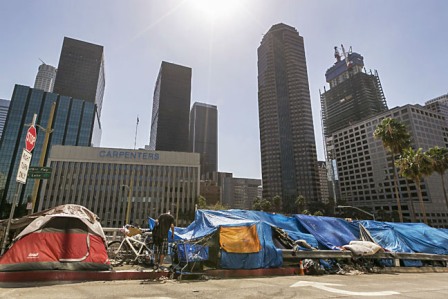 “She came to LAHSA for a challenge and relentlessly led our unprecedented COVID-19 response – housing thousands of seniors in weeks. She will continue the momentum of systemic change and racial justice. I'm proud to announce that her leadership of this organization will continue.''

Supervisor Sheila Kuehl voted with her colleagues, but asked for an amendment to the motion to ensure that the current structure will be evaluated fairly side-by-side with other options. She also questioned the need for a change.

“Given the fact that the audit resulted in the outcome we wanted, which is to have the strongest possible procedures to record outcomes, I'm not sure that we need to assume that should be changes in LAHSA governance,'' Kuehl said. “Helping people prevent and exit homelessness is a complicated and messy business.''

Ridley-Thomas and Hahn's motion was apparently written in response to an audit of internal controls over performance reporting that covered July 2018 through June 2019.

During that time period, LAHSA and its contractors provided services to about 70,000 people who were either homeless or at risk of becoming homeless, according to an Aug. 26 letter to the Board of Supervisors from Auditor-Controller Arlene Barrera.

LAHSA was initially unable to provide some documentation, like detailed lists of clients served, and sometimes overstated program outcomes, according to the auditor-controller.

The homeless services agency said it is called upon to provide more than 100 performance metrics, some of which aren't consistent with system-wide data normally reported and which require a complex series of data queries.

“Based on the sample selection by the AC (Auditor-Controller), only 11 of these clients had inadequate supporting documentation, indicating less than 1% of error across all 19,909 clients that were reported,'' the agency wrote in response to one finding.

LAHSA has historically cross-referenced results with individual case files to ensure accuracy in reporting outcomes, but more staffing is needed to do that work, according to the agency. LAHSA officials told Barrera the agency has made substantial improvements since the audit and planned to fully implement other recommendations by this month.

The audit followed a 2018 review that also found management deficiencies and led to routine monitoring of LAHSA's systems.

Supervisor Kathryn Barger noted that she and Supervisor Hilda Solis had asked staffers to look at the governance structure in February, but the effort was derailed as a result of the county's shift to focus on the global pandemic.

“Without some of the structures that Heidi has put in place ... I truly believe the impact of COVID-19 on our individuals and families experiencing homelessness would have been devastating,'' she said.

However, Barger also agreed that the board must ensure equitable distribution of funding across geographies countywide and make sure that the strongest systems are in place.

Ridley-Thomas said reliable data is key to solving the problem of homelessness and maintaining support for the quarter-cent sales tax that funds Measure H.

“The need for oversight and accountability were embedded into the law that created Measure H; the public should have confidence in the systems designed to track performance,'' Ridley-Thomas said. “Ac­curate and reliable data is crucial to making sure we are making the most of our resources, given the scale of the homeless crisis.''

The board directed Barrera, the new acting CEO Fesia Davenport and County Counsel Mary Wickham to report back in 30 days with recommendations for alternative governance models and a recap of outstanding issues facing LAHSA.

The proposed Measure H funding recommendations for the 2020-21 fiscal year are set to be reviewed by the board Sept. 15.

The Los Angeles County Board of Supervisors today extended a moratorium on evictions through Oct. 31.

The board also set the county's moratorium as the minimum standard for cities countywide, something Supervisor Kathryn Barger had previously pushed back against.

Supervisor Hilda Solis said the moratorium could keep families sheltered who might otherwise end up homeless.

“The COVID-19 pandemic has driven unemployment rates to historic levels, forcing many families to unfairly choose between paying rent or putting food on the table,'' Solis said.

“My commitment is as strong as ever to help individuals and families who desperately need economic relief due to this crisis.''

The county estimated that 227 people become homeless every day, while the county can only place 207 people into housing each day, on average. Two-thirds of the adults living on the street or in their cars were homeless for the first time last year, and the majority say economic hardship landed them there, according to the county.

“Without the county's intervention during this crisis, the number of people losing their homes due to evictions would have likely increased,'' Solis said.

“The actions taken today will protect our most vulnerable, rent- burdened households who are already on the brink of homelessness.''