Statement on Arrest of Compton Shooter by Assemblyman and Chair of the Public Safety Committee, Reggie Jones-Sawyer 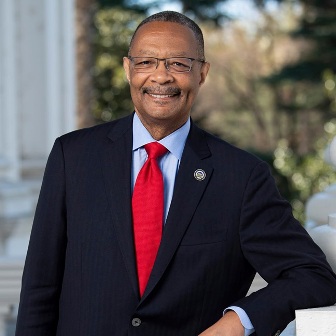 “The apprehension of the alleged shooter and gang member, who nearly took the lives of two Sheriff Deputies, gives our community a sigh of relief knowing another criminal element and threat to the safety of our families and law enforcement is removed from our streets.

The immediate outpouring of support for the two Deputies is a sign that we will not, and must not, tolerate violence of any kind against another human being.

We must rise above political differences and remain above the fray and call out abuses of the law and criminality of every sort. I continue to pray for and wish the two deputy’s a speedy and full recovery.” 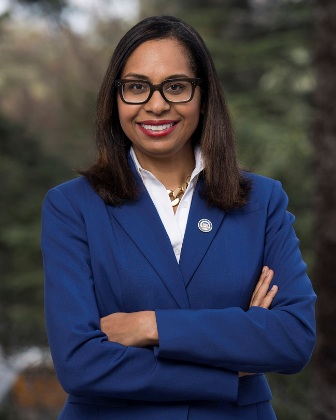 Governor Gavin Newsom today vetoed a bill to establish a pilot program to have community-based organizations serve as first responders instead of the police.

The legislation, AB 2054 – the CRISES Act – authored by Assemblymember Sydney Kamlager (D-Los Angeles), passed both houses of the California legislature with nearly unanimous and bipartisan support. The bill was co-sponsored by 13 organizations and included family members of individuals killed by police, advocates and experts in non-police responses to crises.

According to the Governor’s veto message, the Office of Emergency Services is not the appropriate location for the pilot program proposed in the legislation.

“We’re disappointed in the Governor’s action,” said Kamlager. “This bill was an easy, noncontroversial opportunity to advance racial equity and save lives in California. We will continue to pursue community alternatives to police response that are not controlled by law enforcement and we will work with the Governor to create such a program. Justice demands it.”

“Governor Newsom's decision to veto the CRISES Act is in sharp contrast to his promises to address systemic racism and violence in policing,” said Cat Brooks, Co-founder of Anti Police-Terror Project and Executive Director of Justice Teams Network. “Black and Brown people in mental health crises, plus police with badges and guns, prove time and time again to be a violent at best, and deadly at worst, cocktail. This veto is a missed opportunity for California to be a vanguard of responding to human conditions with humanity. Shame on you, Governor Newsom. While I appreciate that the Governor has stated he will work on this through the State Budget in the next legislative session, how many lives will we lose between now and then?”

Despite the positive impact and cost savings of community-oriented responses to emergencies, California has done little to offer and support these efforts.

Instead, law enforcement officers respond to emergencies better suited to peer support experts, or crisis counselors trained to deescalate and resolve crises. Community-based services need to be part of the web of emergency response networks.

“Not having the CRISES Act puts families in jeopardy because don’t’ have alternatives to police as a response to mental health crises. If we don’t have a CRISIS Act, more lives can be lost like my son Miles Hall’s. Our family deserved to have alternatives to ensure his safety, ” said Taun Hall, mother of Miles Hall who was killed by Walnut Creek police on June 2, 2019.

Law enforcement officials have expressed frustration and a desire to focus on public safety emergencies and a preference for trained health professionals to respond to the type of crises targeted by this legislation.

A wide range of organizations, cities and government officials supported the CRISES Act. The bill received no opposition. 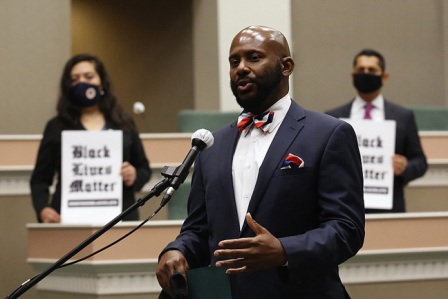 Governor Gavin Newsom signed AB 1196 (Gipson) today, a bill that makes it illegal for law enforcement statewide to use chokehold and carotid restraints to forcibly detain a suspect.

Assemblymember Mike A. Gipson (D-Carson) authored AB 1196 in response to the tragic death of George Floyd and hundreds of other suspects subjected to dangerous chokeholds and carotid restraints used by law enforcement.

“California has again led the nation by passing some of the strictest police use-of-force standards while also mandating de-escalation and use-of-force training. The people have made it clear that now is the time to rise up and recognize that changes must be made so that law enforcement can do what they were sworn to do – protect and serve,” said Assemblymember Gipson.

“This bill clearly defines some of the substantive changes that are needed. It’s a beginning.”

Gipson stated, “AB 1196 will not bring back George Floyd, Eric Garner, Fermin Vincent Valenzuela or any of the other victims who have died from these restraints but it will prevent more unnecessary fatalities.

It’s a step towards healing and repairing trust between the community and law enforcement. I applaud Governor Newsom for signing AB 1196 and the other police reform bills. Having the incredible support of Speaker Anthony Rendon gave this bill the support need to get it across the finish line and I’m very grateful.”

Last week, Assembly Speaker Anthony Rendon (D- Lakewood) appointed Gipson to chair the inaugural Assembly Select Committee on Police Reform. "I am honored by the solemn responsibility of the Speaker's appointment,” said Gipson. “The committee will continue California’s leadership in police reform and seek measures to ensure public safety. We can and will do more.” 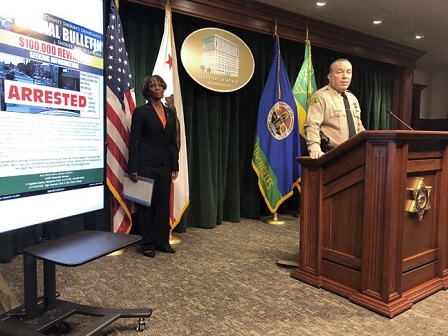 An ex-con arrested earlier this month in connection with a carjacking was charged today with trying to kill two Los Angeles County sheriff's deputies, who were wounded in an ambush shooting while sitting in their patrol car outside a transit center in Compton.

Deonte Lee Murray, 36, pleaded not guilty to two counts each of attempted murder of a peace officer and possession of a firearm by a felon in connection with the Sept. 12 attack on the deputies, according to the Los Angeles County District Attorney's Office.

He had already been charged Sept. 17 with one felony count each of carjacking, second-degree robbery and assault with a semi-automatic firearm – along with gang and gun allegations – involving a Sept. 1 carjacking in Compton, in which he allegedly shot a man in the leg with a high-powered rifle and stole his black Mercedes-Benz. He pleaded not guilty to those charges and has remained behind bars since his Sept. 15 arrest.

Two additional charges stemming from the earlier crime – attempted murder and possession of a firearm by a felon – have since been added, according to the District Attorney's Office.

Murray, who is due back in a Compton courtroom Nov. 17, was ordered to remain behind bars. His bail was increased from just over $1 million to $6.15 million as a result of the new charges.

“We've all seen the shocking surveillance video of the shooting and the heroic actions of the wounded female deputy as she drags her partner to safety,” the county's top prosecutor said. “That video, plus other compelling forensic evidence, are the basis of charges for this prosecution.”

Surveillance video showed the suspect approaching the patrol vehicle from behind, walking up to the passenger side of the SUV, pulling out a handgun and firing through the passenger side window before running away about 7 p.m. The Transit Service Bureau deputies were parked outside the Metro A (Blue Line) Station at Willowbrook Avenue and Palmer Street.

Murray allegedly fled in a black Mercedes-Benz – the type of vehicle that had been stolen in the carjacking – and was driving a Toyota Solara when he discarded a pistol while being pursued by sheriff's investigators prior to a standoff in Lynwood three days after the deputies were shot, according to sheriff's homicide Capt. Kent Wegener.

Ballistics testing subsequently determined that the .40-caliber pistol was the same one that had been used to shoot the sheriff's deputies in Compton and it was “conclusively linked through forensic testing” to Murray, the sheriff's homicide captain said.

The pistol was five rounds short of its full capacity, according to Wegener, who said five rounds had been fired at the deputies.

Sheriff Alex Villanueva had earlier told multiple media outlets that there was no connection between the ambush of the deputies and the carjacking suspect, who was arrested after a chase and standoff that ended in Lynwood.

“We're not going to tell you everything we suspect,” the sheriff said, in defending his earlier remarks. “We would not be doing our job. We had no evidence at the time to tie him to anything else. Did we have suspicions? Yes ... We have to be very careful and responsible with what we put out there.”

Investigators initially had no evidence that Murray – who has prior convictions for sales and possession of narcotics, firearm possession by a felon or addict, receiving stolen property, burglary and terrorist threats – was responsible for the attack on the deputies, according to Wegener.

“We knew that he was a violent offender, was accused of stealing a black Mercedes-Benz and lived in the area. However, there was insufficient evidence to support an arrest, much less a criminal filing for the charge of attempted murder on a peace officer and to label him in the media as the person responsible,” the sheriff's homicide captain said.

“Additionally, bringing the public focus on him at that point of the investigation may have influenced the pending witness interviews and further compromised the mission of solving the attempted murder of the deputies,” he said. “As the investigation progressed, we gathered sufficient evidence to substantiate not only the arrest but the filing of criminal charges in this case.”

The sheriff's homicide captain said the black Mercedes-Benz that had been taken when the carjacking victim was shot was located “a short distance” from the containment scene that had been set up by sheriff's deputies during the standoff.

Investigators have also collected dozens of video clips from throughout the area near where the deputies were shot that “document the suspect's travels prior to the shooting, during the assault and through the time that the Mercedes-Benz was abandoned in the city of Lynwood,” according to Wegener, who said investigators believe Murray acted alone.

When asked to comment on a motive for the attack on the deputies, Wegener said, “He obviously hates policeman and he wants them dead.”

The sheriff said “we saw the worst of humanity – a cowardly act where a suspect ambushed and shot and attempted to kill two of our deputies.”

“This cowardly ambush was followed by bystanders celebrating and cheering that the deputies had been shot, and that followed at the hospital – the sanctity, the quiet sanctity of the hospital – with protesters cheering and chanting for the deputies to die,” Villanueva said. “These acts and that day, I will not forget it, and it represents the worst in humanity and it shocked the whole nation. And that evening, I said we will find this man. And I can report today, we have found our suspect.”

He said was heartened by an “outpouring of support” from across the nation by people from all walks of life, along with both presidential candidates.

“Sometimes from the worst comes the best and this is an example of that,” the sheriff said. “We have a suspect in custody and justice will be served.”

Both deputies, who were sworn in 14 months earlier, are recovering at home, Villanueva said. They face reconstructive surgeries and that it's “going to be a lengthy process,” he said. “But, fortunately, they're doing O.K.”