African-American scholarship recipients emerging as next crop of leaders 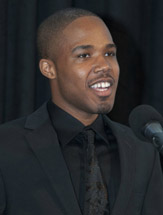 What does it take to be a leader? Dr. Martin Luther King, Jr. was a great orator, Muhammad Ali was a fighter in and out of the ring, and aviator Bessie Coleman was as determined as they come. One thing they had in common was their affinity for leadership which was apparent at an early age.  Today, three stellar scholars from Ronald McDonald House Charities®/Afri­can American Future Achievers (RMHC/AAFA) scholarship program are emerging as young leaders in their communities and on their college campuses as well. The scholarship program is hosted locally by Ronald McDonald House Charities® of Southern California (RMHCSC) and supported by the fundraising efforts of local McDonald’s owner/operators and corporate staff.  Each of these students have drawn inspiration from leaders of the past, while they start to build their own ideas of what it takes to become a leader today.

LaShyra Nolen, a sophomore Health and Human Science major at Loyola Marymont University (LMU), believes being a leader means being bold and being prepared to act so the voices you serve are heard. She plans to do just that as a Clinton Global Initiative Student innovator, a program that provides support for undergraduate students who are developing new solutions to the world’s most pressing issues. Her plan is to create a five-week health program in the Riverside and San Bernardino communities that help families set healthy trends. 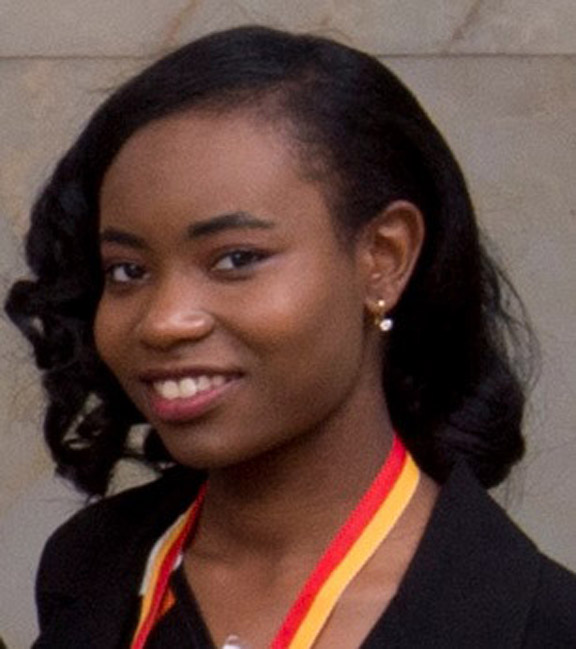 Nolen says the RMHC/AAFA program gave her confidence. “The fact that such an organization saw me fit to represent them showed me that I have people who believe in me,” says Nolen. “I asked myself, why can’t I be successful and do well in college too?” Doing “well” is an understatement for Nolen who serves her campus as a student senator, resident hall advisor, and member of LMU’s Belles Service Organization.

The aspiring doctor, who is from Rancho Cucamonga, says her drive and passion for her community was inspired by her mother. She received two college degrees while taking care of Nolen and her little brother as a single mother. “Everything I am doing all goes back to giving back and using my strength to help others.”

Thomas Watkins was selected as a RMHC/AAFA recipient in 2013 and has since partnered with RMHCSC to talk with students about reaching their goals and the importance of pursuing college. A Corona native majoring in Hotel and Restaurant Management at California Polytechnic State University in Pomona, Watkins believes a leader has to know how to command attention through communication. “A leader could be anyone, from any walk of life,” says Watkins. “They could talk to the CEO of a company, and also connect with a kindergartener with no problem.” 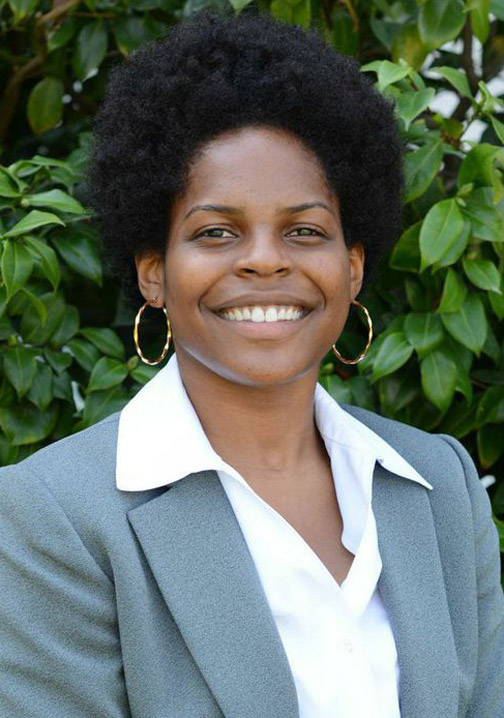 As an aspiring restaurateur, Watkins hopes to continue connecting with his community. He believes food is the one thing that can put a smile on anyone’s face. “I want to help my community by creating programs that teach kids how to cook as an outlet for them,” he says.

Biola University student, Lorissa Payne, began thinking of ways she could become a leader in high school. The freshman English major noticed she had the gift of writing and challenged herself by taking advanced placement classes which led her to be selected to the Torrey Honors Institute at Biola. The institute spurs students to take a deeper dive into Western literature and aims to build strong, Christian leaders.

“Writing is a primary form of communication and if students can’t express themselves through writing, it is a detriment to one’s future,” says Payne. She aspires to work in education and believes leadership is all about leading by example. “When others see a living example of a leader, it allows them to think they can succeed too,” she says.  She calls former United States Secretary of State Condeleeza Rice her living example. “Reading her biography in high school made me realize we were raised similarly, says Payne. “Her story showed me when people utilize their gifts to help others; they can go much further in life.”

Nolen, Watkins, and Payne are just a few of the 109 students identified each year through the RMHCSC scholarship program. Since 1990, RMHCSC has awarded more than $4.5 million in scholarship funds to local students. It allows students the opportunity to think about their future, makes college attainable and helps students inspire others.  Schol­arships are awarded through four programs, including: RMHC /AAFA, RMHC/Asian Pacific American Students Increasing Achievement (ASIA), RMHC/Hispanic American Com­mitment to Educational Re­sources (HACER) and RMHC/ Scholars.

the parent company of SCE, and made possible by CBS EcoMedia Inc. and The Kids In Need Foundation.  (Southern California Edison) 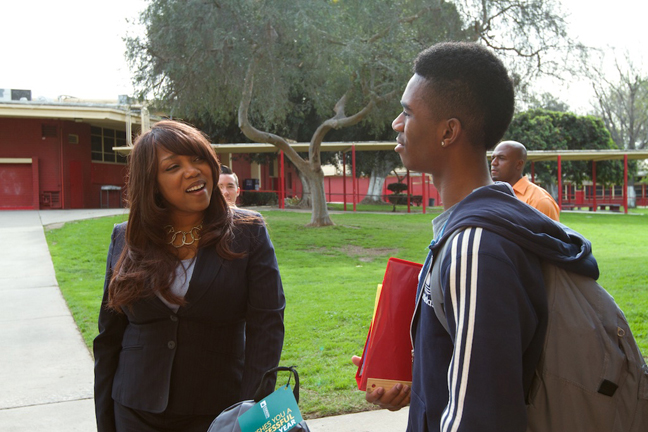 Tammy Tumbling, left, director of Community Investment and Philanthropy at Southern California Edison, chats with a student, right, at Morningside High School where seniors recently received new backpacks filled with essential school supplies funded by Edison International, the parent company of Southern California Edison, and made possible by CBS EcoMedia Inc. and its national partner, The Kids In Need Foundation.  Seniors at Inglewood High School were also surprised with new backpacks and school supplies. The giveaway is part of Edison International’s commitment to support education in the communities it serves and to promote its $1.2 million Edison Scholar Program which has awarded nearly $4 million in scholarships to 460 students.  This year, Edison International will award 30 students scholarships valued at $40,000 each.  The deadline to apply is February 1.  (Southern California Edison)

Feb. 1 is deadline to apply for $1.2 million Edison Scholars Program

Thirty scholarships valued at $40,000 each and paid over four years will be awarded to high school seniors who either live in or attend public or private high schools in SCE’s service area.

Applicants must have a 2.8 GPA or better. Students from low-income families and underserved communities are especially encouraged to apply.

Since 2006, Edison International has awarded nearly $4 million in scholarships to 460 Edison Scholars.

To apply and to get additional eligibility information, students are encouraged to go to: www.scholarsapply.org/edisonscholars. Applications must be received by 11:59 p.m. PST, Feb. 1.

Scholarship recipients will be announced in April and they may also be eligible for summer internships at SCE after completing their second year of college. Dependents of Edison International employees are not eligible for the Edison Scholars Program. 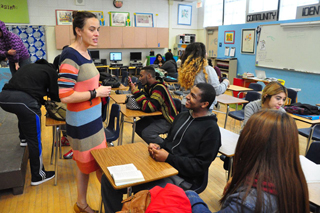 The Dominguez High School staff is working hard to ensure all students are college and career ready. Following its three-year accreditation by the Western Association of Schools and Colleges (WASC) last spring, they have wasted no time implementing recommendations made by the accrediting commission after a one week visit in March.

“CUSD is proud of the efforts of the entire staff and student body during this process,” said Dr. DeWayne Davis, Senior Director of CUSD Secondary Education. “The recommendations of the team were to continue to build upon the foundation laid for student success in the areas of AP (Advanced Placement) courses, CAHSEE, AVID (Advancement Via Individual Determination), PBIS (Positive Behavior Interventions and Supports), college exams such as PSAT, and data driven instruction.”

Davis added that Dominguez staff members mobilized quickly to make sure best practices are within WASC guidelines. “Using the recommendations to inform the School Plan for Student Achievement (SPSA), the staff have corralled to ensure full implementation and renewed commitment to graduating college and career ready students,” he said.

“We do see teachers implementing WASC strategies. In fact, some teachers have collaborated to implement them in the core classes. Additionally, we have focused on keeping students in class, in terms of day-to-day attendance and period attendance,” she said. “We have begun training all our teachers in AVID strategies and other agreed upon instructional methods. Thus far teachers have been trained in organization strategies for students, marking the text, interactive note-taking, and academic discussion.”

“The teachers know they are accountable for keeping our students engaged. One can definitely feel a shift has taken place. Student complaints are very low while staff expectations for performance and behavior have gone up. There is a sense of accountability.”

Landesfeind added, “Full implementation of the WASC recommendations would mean a top quality education for every student. It would mean that we could guarantee that any student graduating from our school is truly college and career ready.”