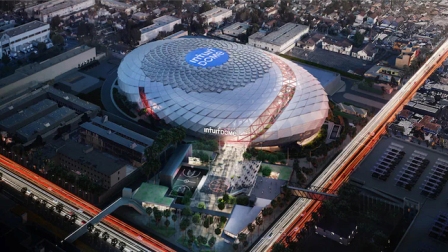 Following years of planning and a high-dollar legal battle, the Los Angeles Clippers broke ground today on the team's long-anticipated Inglewood arena, which will be called the Intuit Dome under a 23-year naming-rights deal with the tech giant.

The $1.8 billion arena at Century Boulevard and Prairie Avenue – near the SoFi Stadium football complex -- is expected to be completed in time for the 2024-25 NBA season. The Clippers will continue to play at Staples Center until then.

“We want to build a home that is our home, that sets a standard for us,'' Ballmer said. “We don't want to play in anybody's shadow.''

Ballmer said the building would be a technological marvel, featuring a two-sided “halo scoreboard'' encircling the arena with more than an acre of lighting. The building will also include an 80,000-square-foot outdoor plaza and a full-size outdoor court.

The complex will include the 18,000-seat basketball arena, team practice facility and corporate offices for the Clippers. The city of Inglewood gave final approval to the project last year.

“When we began the search for a partner for the L.A. Clippers and our new dome, we looked for one that shares our passion for technology, the pursuit of innovation and our commitment to customers, fans and community,'' Ballmer said in a statement released by the team. “Intuit is a perfect fit and we're excited to be calling our future home the Intuit Dome.''

The team estimates the complex will generate about $260 million in annual economic activity for Inglewood and approximately $100 million in tax revenue over the first 15 years of operation.

Plans for the arena hit a legal snag when Madison Square Garden Co., which owned the nearby Forum, sued the Clippers and Inglewood, claiming the project violated a non-competition clause of the venue's operating agreements with the city. The dispute was resolved last year when Ballmer purchased the Forum from MSG for $400 million.

The Forum is expected to remain primarily as a music venue. 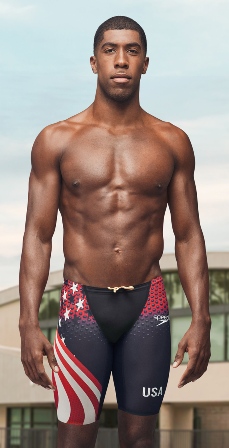 Jamal Hill is another Paralympian in our own backyard. The Inglewood native and alum of Serra High School in Gardena won a bronze medal in the 50m freestyle S9. His 25.19 time broke his own American record in the event.

Spectators were not allowed in the Paralympics, so his close relatives watched him compete from home.

“I’m over the moon, I’m past cloud nine,” Hill’s mother, Sandra Floyd-Hill, said. “He’s living a reality that he worked hard for.”

Hill lives with the neurological condition Charcot-Marie-Tooth which causes abnormalities in the nerves that supply to extremities. He has zero percent nerve capacity from his knees to his feet and 30 percent from his elbows to his fingertips.

“I’m really governing everything off of my knee joint and off my hips,” Hill said. “It feels like I’m walking on my knees … I don’t text in bed with a phone over my face because I do not have very good grip.”

Hill wants his success in Tokyo to encourage youth to learn how to swim. When he dropped out of college, he made a promise to God to use his talent as a point of positive influence.

“I have this dream, I have this vision, it’s bigger than me,” Hill said. “I want to impact a lot of people, I want to have this platform to inspire.”

Hill is sponsored by Speedo and is a member of their “Make Waves” campaign; through their campaign, he shared his dream of teaching one million people how to swim. This became his dream during the 2018 U.S. Paralympics Swimming Para National Championships. After winning two golds and one silver at the meet, he realized that he wanted to be more than just a para swim champion.

“I have a really good understanding of where swim education is failing our low to middle-income communities,” Hill said. “I’m able to be honored by the world on this global stage, on that podium. It’s also an opportunity for me to be honoring the world and really be of service.”

To help make his goal a reality, Hill created the Swim Up Hill Foundation to teach youth and adults how to swim.

Swim Up Hill has programs that allow people to learn from their homes as well as a five-hour swim course. Hill is also partnering with the Angel City Games by implementing his swim curriculum in their para swim programming.

Hill also used his sponsorship with Speedo to help several members of Team USA by providing them with the proper swimwear to compete.

“He knows how hard it is and a lot of them didn’t have sponsors,” Floyd-Hill said. “He felt that if you used his allotment of skill to share goggles, swim caps … that it would help them and improve their swim.”

It is evident that the promise he made with God is paying off. Through Speedo’s Make Waves campaign, Hill’s likeness was featured in billboards; one of the ads was on a building off the 405 freeway near LAX and in Venice beach. Hill noted that this was validation that he is making a powerful impact.

“I freaking loved it, I think the whole city loved it,” Hill said. “In some ways, I felt like I have a little bit more attention internationally than I do in my hometown, so to start to embody this hometown hero … as we say ‘hood famous.’”

Few Can Stay on Par with James Reede III

James Reede III wants to leave a legacy and has the work ethic to do so. He manages pharmacies for his day job and spends his weekday afternoons working on his professional golfing career. He is also training to compete in a triathlon; his days usually start at 4:50A.M., where he gets his running and leg exercises done before work.

Although his job takes up most of his time, the income helps Reede III pay for the costly endeavor of being a pro golfer. He is working to compete in Monday qualifiers, which tend to have pricey entry fees.

“Golf is expensive, especially when you’re trying to make money to fund the whole exploration,” he said. “My whole golf bag is pushing seven grand for everything.”

Reede III has been playing golf since he was five years old and excelled at the sport. He found several organizations that allowed him to play golf, including the Sacramento Area Black Golf Club, The First Tee of Greater Sacramento, and The Wildhawk Golf Association. Through the organization Youth on Course, Reede III was able to play on golf courses in the afternoon for three dollars.

During his time at Monterey Trail high school, he helped his school district maintain their funding for golf teams. Reede III befriended a professional golfer who cut a $70,000 check to save the golf programs. He then got a full athletic scholarship to play for Jackson State University. When he competed at tournaments against 15 other schools, he would be the only African American golfer. His coach told him that he was not competing for just himself, but to represent Black people.

“That really resonated with me,” Reede III said. “That held me to a higher standard, I would never get mad and yell and throw clubs or curse because I know I got multiple people looking at me.”

Reede III recently finished his MBA from the University of South Carolina, Aiken and his job paid for his degree. His efforts put him on the president’s and dean’s list. Playing golf and being exposed to the culture of country clubs helped him with his current job.

“When you play golf, you meet all different types of businesspeople,” Reede III said. “Golfing has helped me get to where I am in being able to talk the lingo, being able to schmooze people.”

Reede III believes every young Black man should learn how to golf because of the networking skills it provides.

Throughout the years, Reede III accumulated several awards for his golfing skills. In 2012, he was named Junior Golfer of the Year. That following year, Reede III was inducted into the African American Golfers Hall of Fame.

“I’ve done everything, worked at food banks” Reede III said. “I have thousands of community service hours in high school.”

A main source of inspiration for Reede III is his father, James Reede Jr. Ed.D who served in the military and became the first owner of a wind farm in California.

“He’s always worked two jobs my entire life,” Reede III said. “He laid the ground work for me, I’m trying to keep up with him.”

Reede Jr. Ed.D also is the founder and co-chairmen of the Northern California African American Young Male Conference. As an undergrad student, Reede III began participating in his father’s organization.

“I mentored first-generation young Black males. I helped them navigate that whole process being away from home, getting registered for classes … acting as a big brother,” Reede III said. “I’ve been blessed and I feel like you got to pay it forward.” 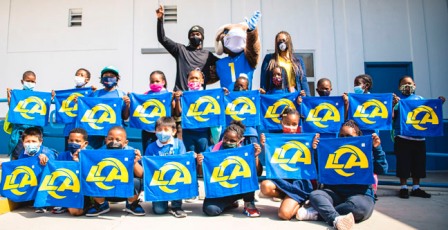 The Los Angeles Rams continue to be an asset to Warren Lane Elementary school. Defensive back David Long Jr. hosted a backpack giveaway for their students.

He handed out 240 backpacks that were filled with pencils, notebooks, pens, and rulers.

“This is an amazing event put on by myself, the Rams, and my agency,” Long Jr. said. “It’s really special to be able to give back to the schools in the community.”

The students wore L.A. Rams shirts that said Inglewood’s iconic slogan, “City of Champions.” Along with getting a free backpack, the students participated in football related activities that allowed them to work on their kicking and passing skills. Students also received Rams rally towels and team mascot Rampage was in attendance. Warren Lane Elementary school principal Shonda Calhoun noted that she felt the excitement of the students from the beginning of the day. 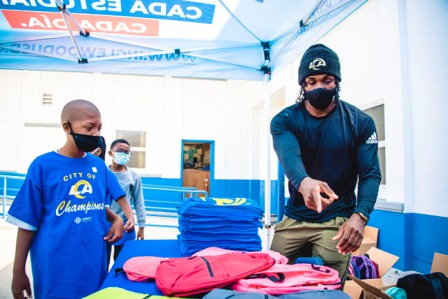 “Something like this they’ll remember forever,” she said. “It’s not everyday you have Rampage on campus, a professional football player on campus … it’s just been a phenomenal experience.”

Calhoun went to every classroom to tell the students about the backpack giveaway a week before and the students eagerly anticipated the event. She told the students to do their best work because they were going to have “a wonderful opportunity.”

“We’ve been practicing making good decisions, having a growth mindset,” Calhoun said. “So, this is going to tie into the things that we’ve been learning.”

With the help of the Rams, including community affairs and engagement manager Johnathan Franklin, Long Jr. chose Warren Lane for the backpack giveaway. 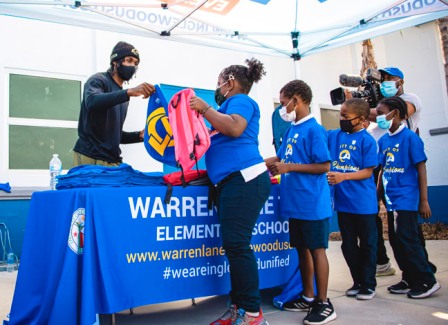 The franchise has been a benefactor to the school throughout the years. Back in 2017, the Rams assisted Warren Lane with a campus beautification project and former quarterback Jared Goff recently helped the school rebuild their library.

“We have the beautiful mural painted in front, that was done a few years ago,” Calhoun said. “We also have a special relationship with Jared Goff.”

Long Jr. is a native of Los Angeles and attended Bishop Alemany before transferring to Loyola High School. He had a 4.0 GPA during his high school years and committed to Michigan.

With the Wolverines, Long Jr. was named on the 2018 All Big Ten first team.

The next year, he became a third-round pick in the 2019 NFL Draft. Long Jr. believes that if a person has the ability, they should find ways to give back to the community.

“Beyond football, they may or may not know who I am,” he said. “But I want to really help as far as giving them resources and things they need to succeed, whatever path they choose.”