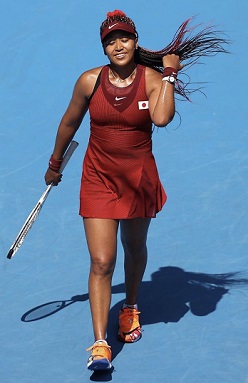 In addition to donating prize money to relief efforts in Haiti following a deadly earthquake, tennis star Naomi Osaka said she plans to do more.

“I feel like I’m not really doing that much,” Osaka said on Monday. “I’m trying to figure out what I can do. The prize money thing was the first thing I thought I could do that would raise the most awareness. I guess that is the reason I announced it.”

A 7.2-magnitude earthquake struck the region on Saturday, with an estimated death toll of 1,400.

On Saturday night, Osaka tweeted her decision to donate her prize money from this week’s U.S. Open tune-up tournament in Ohio.

Osaka, who has a Haitian father and Japanese mother, has an opening-round bye in Cincinnati. She will face the winner of Tuesday’s match between Coco Gauff and qualifier Hsieh Su-Wei.

When asked about Haiti during Monday’s news conference, Osaka became emotional and had to step away for a few minutes before returning to answer more questions.

Haiti is also dealing with the fallout from last month’s assassination of president Jovenel Moise, and now the effects of a tropical storm which is hampering earthquake recovery efforts. 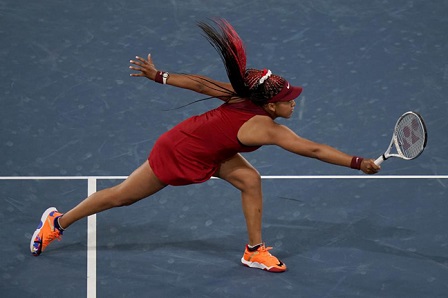 “It’s really scary,” Osaka said. “I see the news every day, and honestly the earthquake was kind of close to my parents’ school there, so I’m honestly not really sure how that’s doing and I haven’t seen any pictures or video of it yet.”

Osaka, who is ranked No. 2 in the world, won her second career Australian Open earlier this year, but withdrew from the French Open and Wimbledon because of mental health concerns.

“It was something I needed to do for myself,” Osaka said. “I was a little bit embarrassed to go out because I didn’t know if people were looking at me in a different way. The biggest eye-opener was going to the Olympics and having other athletes come up to me and say that they were really glad that I did what I did. I’m proud of what I did.”

Osaka also said she reached out to U.S. Olympic gymnast Simone Biles, who withdrew from the U.S. women’s team final in Tokyo for her own mental health needs.

“I sent her a message,” Osaka said. “I also wanted to give her space because I know how overwhelming it can feel.”

Osaka, who lit the Olympic cauldron in the opening ceremony in Tokyo, said she took time off after returning and said she’s motivated to do well in Cincinnati after having to withdraw from last year’s event with a hamstring injury.

The Western & Southern Open is considered a tune-up for the US Open, which begins Aug. 30 in New York.

“I felt like I played well in Tokyo,” Osaka said. “But there was still some decisions that I didn’t make that well, so I just wanted to get that feeling back because I honestly haven’t played many matches this year. I guess I’ll see how well I do in this tournament and sort of lead it on from there into New York.” 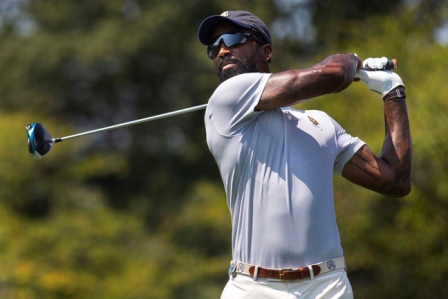 Former NBA sharpshooter JR Smith made news recently on Wednesday when he announced he has enrolled at North Carolina A&T and plans to join the men's golf team while pursuing a degree in liberal studies.

Smith looks to get cleared by the NCAA and use his eligibility to join the historically Black university after having played 16 seasons in the NBA, winning championships with the Cleveland Cavaliers in 2016 and Los Angeles Lakers in 2020.

The 6-foot-6 shooting guard originally committed to play for Hall of Fame coach Roy Williams and North Carolina before deciding to hire an agent and enter the NBA draft in 2004.

“They always told me I could go back (to school) whenever,” said Smith, who is known to be a 5 handicap.

According to NCAA rules: “An individual shall not be eligible for intercollegiate athletics in a sport if the individual ever competed on a professional team in that sport.”

The rule does not hold a ban on a former professional athlete from competing in an entirely different sport.

NBA Hall of Famer Ray Allen convinced Smith on the idea of going back to school while on a golf trip and it was one that he agreed with.

“Ray Allen kind of convinced me,” Smith said Wednesday at the pro-am at the Wyndham Championship. “We had a little golf trip in [the Dominican Republic] and he was talking about some of the things he was doing, about going back to school and challenging yourself for us athletes. I really took heed to it and decided to go back – and one of the best liberal studies programs is at A&T.”

The 35-year-old has been seen at numerous PGA Tour events throughout his career and said he first started playing golf 12 years ago at the late NBA Hall of Famer Moses Malone's charity event.

“Golf is one of those games that has you feeling really high and or can bring you down to your knees and humble you,” Smith said. “And to have that feeling and knowing that all of the game’s pretty much on my own hands and I don’t have to worry about teammates to pass the ball and receiving passes and playing defense so, I can play my game and just have fun.”

Richard Watkins, coach of both the men's and women's teams at North Carolina A&T, said the former NBA standouts arrival is a “big deal.”

“It’s a big deal for A&T. It’s a big deal for him,” said Watkins, who was in Smith’s gallery on Wednesday. “It’s not very often that somebody in his position really has an opportunity to have a thought, a dream, an idea, and to be able to go ahead and move in that direction.”

Smith may also be able to profit off college golf now with college athletes being allowed to profit from their names, images, and likenesses, and he acknowledged just that in a social media tweet.

Smith looks forward to joining an HBCU atmosphere and mentioned there won’t be much down time with his classes starting August 18.

“I’ve got no free time now,” Smith said. “Raising kids and going to school, my schedule will be full. I can't wait to be a part of the HBCU family.

“I’ve really been embraced by everybody so far on campus. I’m looking forward to start going to football games and repping Aggie Pride.” 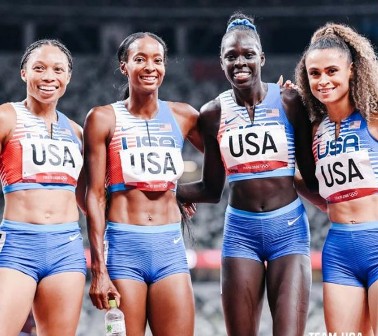 In the 2020 Tokyo Olympics, Team USA won 113 medals, including 39 gold medals. Many Black athletes contributed to the success of Team USA, some making history in the process. 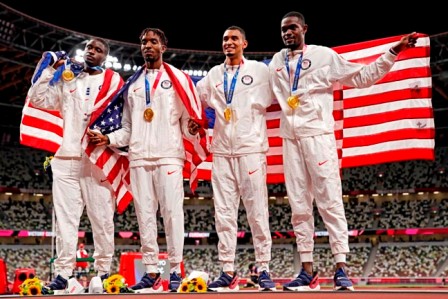 A team made up of USC Trojans Rai Benjamin and Michael Norman along with Michael Cherry, and Bryce Deadmon clocked in a 2:55.7. Benjamin ran anchor while Norman ran the second leg. It was a moment of redemption for the Trojans as Norman came in fifth in the 400m final and Benjamin earned a silver in the 400m hurdles. 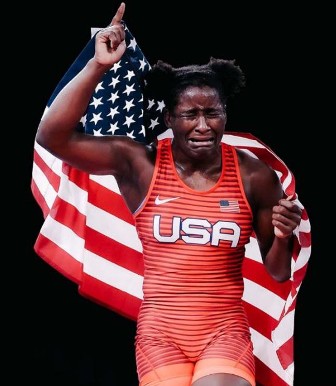 Mensah-Stock battled against competitors from Japan, China, Ukraine, and Nigeria to reach gold. She is the first Black woman and the second American woman to win gold at this event. Mensah-Stock noted that she will use her Olympic earnings to buy her mother a food truck. 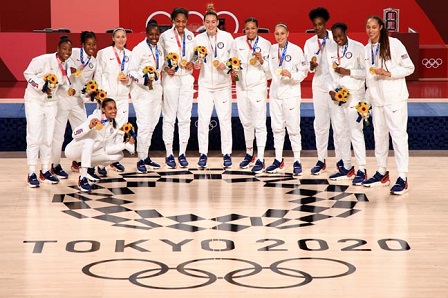 Team USA women’s basketball has not lost an Olympic game since the Barcelona Games in 1992. They assembled a 55-game winning streak, resulting in seven consecutive Olympic gold medals. Team USA calls the women’s basketball program “The Greatest Dynasty in Basketball.”

Dawn Staley, who won three gold medals as a player, was head coach. This was the fourth gold medal for WNBA all-time rebound leader Sylvia Fowles and the fifth for WNBA legends Diana Taurasi and Sue Bird. 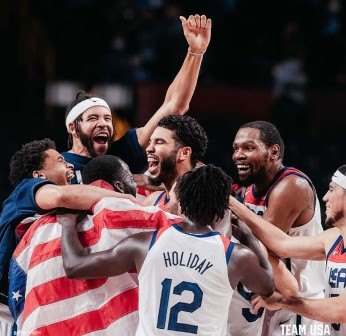 This was the coronation event for the track and field icon Allyson Felix. She ran the second leg of the stacked squad that consisted of Sydney McLaughlin, Dalilah Muhammad and Athing Mu. They paced the heat with a 3:16.85 time. Every member of the squad has won at least one Olympic gold medal prior to this win. 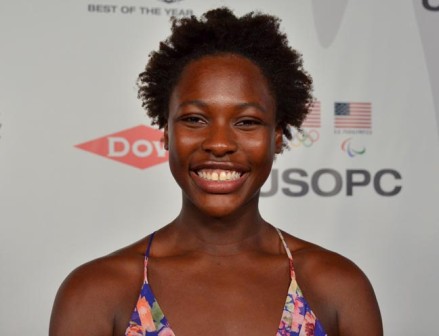 As the goalie of the team, Ashleigh Johnson successfully ensured that their opponents scored as little as possible. She helped hold most opponents to single-digit scores, except for the Russian Olympic Committee, where the US beat them 15-11 in the Semifinals. This is the second gold medal for Johnson and the third consecutive medal for the women’s water polo program 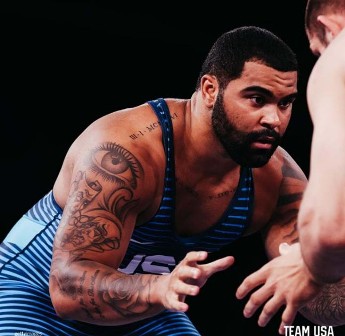 Stevenson did not give up a single point in his first three Olympic matches. He battled the three-time world champion Geno Petriashvili in the gold medal match. Stevenson is also a Pan American champion and an NCAA champion. After having a stellar freshman season at Texas A&M, Mu became the first American to win a gold medal at the 800m since 1968. Her 55.21s time that she clocked in for the finals was her personal best. She also won the NCAA title in the 400m. After their first-round exit from the NBA Playoffs by the Pheonix Suns, the Los Angeles Lakers filled their roster with the league’s most notable veterans.

It all started on July 29, when the Washington Wizards traded guard Russell Westbrook for guard Kentavious Caldwell-Pope, forward Kyle Kuzma, center Montrez Harrell second-round picks in 2024 and 2028 and a 2021 first-round Draft pick.

Westbrook helped the Washington Wizards have a contending run last season, making a career high of 11.7 assist per game. 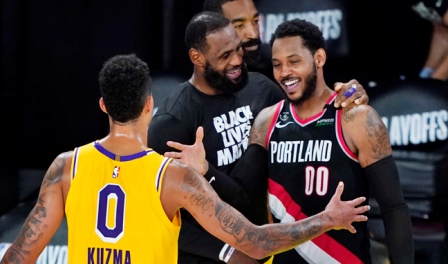 In his career, Westbrook made 23.2 points per game and averaged a triple double in four different seasons.

In 2019, Westbrook expressed interest to Kawhi Leonard about playing for Los Angeles.

This information led Leonard to recruit Paul George as a teammate. Two years later, Westbrook finally earns a chance to play for a team in his hometown. More of the Lakers young players began to depart as guard Alex Caruso signed a $37 million, four-year deal with the Chicago Bulls.

While Drummond and Harrell recently joined the Lakers squad, Caruso and Kuzma were the longest tenured Lakers on the 2020-2021 roster.

Caruso had a hustler’s spirit that helped the Lakers win the 2020 Championship, shooting at 43.6 percent in field goals throughout his career.

The Texas native will be getting a significant pay raise, earning $8.6 million for his first season with the Bulls after the Lakers paid him $2.7 million last year. Kuzma dazzled Lakers fans with his 16.1 points and 6.3 rebounds per game during his rookie season but became a role player after forward Anthony Davis arrived in Los Angeles.

On Tuesday, the Lakers and forward Anthony agree to a one-year deal.

Anthony and James were in the 2003 NBA Draft together and have been friends throughout their careers.

Anthony is the only current NBA player who has four Olympic medals. During the 18 years in the NBA, Anthony shot at 35.3 percent in three-pointers and scored 23 points per game.

The 10-time All-Star spent the last two seasons with the Portland Trailblazers, helping them reach the playoffs.

Anthony spent the first eight years of his NBA career with the Denver Nuggets before being sent to play for the New York Knicks.

Anthony has made 13 Playoffs appearances, but has never reached the conference finals.

Ariza hopes to return to the conference finals in the purple and gold after being out for 12-years.

Like Anthony, Ariza is known for his three-point shot accuracy and shot at 35.2 percent throughout his career. The last time he was in a conference final, Ariza was helping the Lakers secure their 15th championship.

During that playoff run, Howard scored 20.3 points and 15.3 rebounds per game. 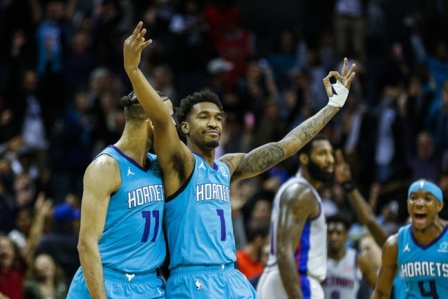 Ellington had a career high of 12.0 points per game and shot at 42.1 percent in field during the 2018-2019 season when he played for the Detroit Pistons.

Despite being in the NBA for 12 years, Ellington has only competed in three different Playoffs. In the postseason, Ellington scored 7.1 points, 2.3 rebound, and 0.5 steals. Bazemore has been in the NBA for nine seasons, but only had four seasons where her reached the Playoffs.

Along with playing for the Atlanta, Bazemore played for The Golden State Warriors and the Sacramento Kings and the Portland Trailblazers.”