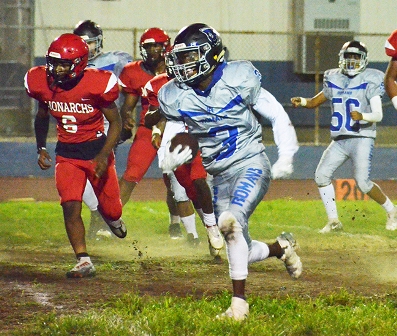 The Los Angeles Romans football team survived a late rally by the Morningside Monarchs to secure a 28-26 victory at Caroline Coleman Stadium in Inglewood.

The game went down to the wire with the Monarchs scoring in the final seconds of regulation. A successful two-point conversion would have sent the game into overtime, but the Romans denied the Monarchs a trip to the endzone in the crucial play.

“It was nerve-wracking, it’s the last play of the game, you got to go all out,” said Morningside quarterback Jaiden Dahl. “I gave it my all, we got the score, couldn’t finish off.”

“Those touchdowns, that was all my team, I just did my part, they did they part and we got the win,” Simpson said. “I was doing the best that I can, do whatever I got to do to win.”

Both Los Angeles and Morningside have a 2-3 overall record.

This puts Morningside in second place in the Ocean League; Los Angeles is currently first in the Southern League.

The Romans scored on their first possession; Simpson secured a 40-yard touchdown from quarterback Shawn Pringle on a fourth down. Morningside returned the favor when Dahl connected with J’yon Smith for a touchdown. At the end of the first quarter, the game was tied at six. 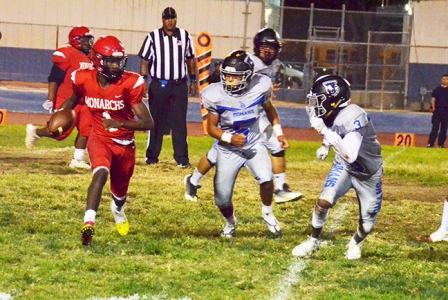 Los Angeles clinched their second touchdown of the night along with a successful two-point conversion early in the second quarter. Morningside was plagued with penalties and Dahl had to chase down the occasional high snap from his center.

The Monarchs did not score again until the third quarter when Anthony Lindsey secured a 14-yard touchdown passing play. Their defense continued the momentum when corner Brian Zavalza-Vasquez committed an 80-yard interception return for a touchdown, giving Morningside a 20-14 lead.

Los Angeles then started up on their own 40-yard line and Simpson made a 60-yard run to give the Romans a two-point advantage.

Morningside continued to fight despite the challenges they faced in the fourth quarter. Pringle scrambled for a six-yard touchdown and the Romans defense picked off the Monarchs twice in the phase. L.A. High senior Khamani Jones made the final pick.

“I didn’t really think that I had a good game,” Jones said. “Whenever I got that interception, it low-key boosted my self-esteem to keep my head in the game.”

A 40-yard pass to Lindsey put Morningside in the Los Angeles red zone with seconds left in regulation.

Dahl scrambled from 20 yards out to score, closing the Monarchs’ deficit to two points. Their two-point conversion failed, giving the Romans their third win.

L.A. High will be battling View Park on September 30 at 4:00P.M. for their homecoming game at Belmont high school. Morningside will battle Beverly Hills at 7:00P.M. at El Camino College. 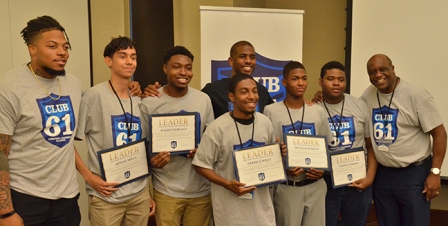 The Chris Paul Family Foundation recently hosted his Club 61 program in Los Angeles in August. Club 61 is a leadership alliance created by NBA star Chris Paul, the name was inspired by the night he scored 61 points during a high school basketball game to honor the life of his 61-year-old grandfather.

The alliance includes nonprofit organizations from the cities that Paul played basketball for: the Brotherhood Crusade and College Track of Los Angeles, Jump N For The Future of New Orleans, Traid Cultural Arts-Queen Juneteenth and the Salvation Army Boys and Girls Club of North Carolina of Winston Salem and Project Alpha of Phoenix.

Five youth from each organization traveled to and stayed on the UCLA campus to attend this four-day program.

“I think exposure is key, a lot of times we’re stuck inside our communities,” Paul said. “Getting out here, getting this exposure … getting that at somewhat of an early age, I think it’s invaluable.”

“I later found out that day that networking was one of the most greatest skills that humans can have,” Everett said. “I’m going to keep that forever.” 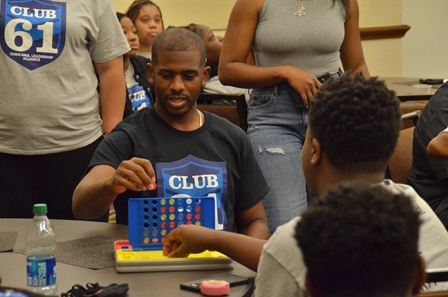 The youth also took a tour of the UCLA campus and visited the Grammy Museum and the Tupac Shakur Museum.

They also participated in a community service project with the non-profit Blessings in a Backpack. It was the first time College Track student Giselle Orozco visited the two museums.

“I learned so much from here. I had a great experience because the connections I made here with people, the things I learned, how to build relationships, how to be financially stable,” Orozco said. “I’m really gonna miss the people that I came here with …I would definitely recommend it to anybody.”

The main principles of Club 61 make up the acronym PRIDE: Purpose, Respect, Integrity, Discipline, and Excellence. Paul noted how his grandfather had those qualities; he owned the first Black-owned service station in North Carolina.

Paul hopes that the participants not only apply the lessons they learned from Club 61 to their lives but spread the information to their families and friends in their hometowns. He also wants the youth to know that there are people that will aid them when life gets hard and they have love and support.

“A lot of times when kids grow up in the hood, everybody tells them what they can’t do and what they can’t be,” Paul said. “We just want them to understand that there’s a community, there are people, there are resources and you got to believe.” 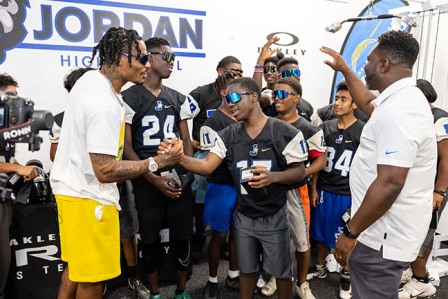 When the weight room was unveiled, Chargers safety Derwin James visited the Jordan Bulldogs football team to give them Oakley sunglasses.

“This weight room is a blessing that’s been prayed for for years. When I first came here, it was an eye sore, equipment that we couldn’t use, broken,” said Jordan football coach Derek Benton. “God smiled on the Jordan Bulldogs and our high school.” 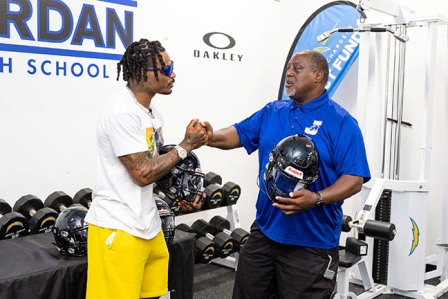 James is a player ambassador for both the Chargers and Oakley told the players and coach that they were deserving of a renovated weight room.

He noted how seeing their reaction to the new weight room was “priceless.”

“The weight room we just did for them was amazing, new equipment, new racks to lift to squat, do everything,” James said. “Just seeing the screams and the smiles, I probably would have been jumping up and down for joy the same way because these kids are going to remember this forever.”

“Our head coach Brandon Staley has two things that we’re about: relationships and competition,” Hightower said. “This allows you to be competitive, but when you do it together, that brings  the relationship.” 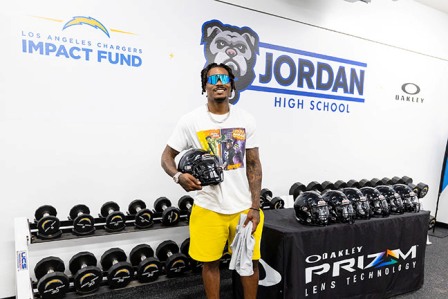 “Last year, we didn’t have a lot. We barely had anything, we had broken stuff,” he said. “They changed everything up, they got us looking better.”

The Bulldogs are currently 2-0 so far this season.

They not only defeated Contreras and West Adams but did not allow them to score.

After taking a tour of the school, the Chargers Impact Fund decided to work on upgrading the amenities of their weight room.

“This is going to have a great impact not only on the student athletes, but also on the students who do PE classes here,” said Chargers Impact Fund manager Taylor Chavez.

“It gives them a safer learning environment and it ties in with our pillar: safer places to play.”

Jordan Athletic Director Jamie Krueckberg noted how the football team is appreciative of the renovation and how the newly refurbished weight room will impact the student body. 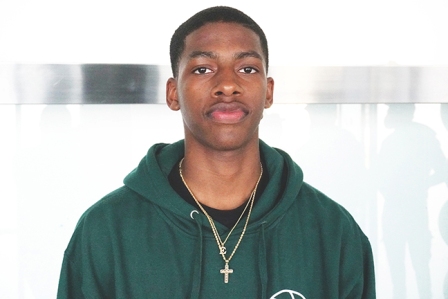 Elijah Anderson used his talent in basketball to earn an opportunity to compete at the college level. The recent alum of Inglewood High School now attends Philander Smith College in Little Rock, Arkansas.

“I went to the HBCU basketball showcase at Lynwood high school and they saw me and they liked my game,” Anderson said. “After that, they got in contact with me and said they extended an offer, so I took it.”

Anderson has been playing basketball since he was nine years old. His senior year was the year he played varsity for the Inglewood Sentinels and his efforts earned him MVP honors on the team. Anderson also noted how becoming MVP was “amazing.”

“All the hard work paid off, early morning workouts before school, late night workouts,” he said. “It’s just a relief of stress just to see that all my work has paid off.”

Anderson helped the Sentinels to a 9-10 overall record and a 3-2 Ocean League record. A highlight of the season for him was attending practices.

“My teammates were great,” Anderson said. “We had a lot of fun, we competed and had fun in practice.”

The work they put in during practice helped the Sentinels get a spot in the playoffs. Anderson helped his team secure a postseason victory; he mentions how the win was a proud moment.

“It’s something I’ve never done in all of my years, not even on the JV level did I make it to playoffs,” he said. “That night was amazing for me and then we got back to work soon after.”

For Anderson, being a student athlete means being focused on succeeding in school because good grades allow athletes to compete. To balance his obligations, he sticks to a tight schedule of exercising and studying.

“I wake up before school to work out,” Anderson said. “Then I have school and once I get home I do my homework. Then after I’m finished with my homework and studying, I work out again.”

Anderson’s favorite class is journalism. The class taught him how to write in a way that gets the reader’s attention.

“Learning about it helped me out especially as far as English and writing my essays and just being more interested in reading up on certain things,” he said.

Along with playing for the Sentinels, Anderson further honed his basketball skills by playing travel ball. Through this experience, he learned how trust can improve team chemistry, which can lead to wins.

“It helped me as far as gaining trust quickly,” he said. “When you play for certain teams, you might not know everybody when you first get there.”

Outside of academics and athletics, Anderson works with organizations to help the less fortunate.

“A mentor group that I’m in, we’ve given away clothes, shoes, and food,” he said. “I feed the homeless with my church and also with the mentor group, we’ve cleaned up parks.”

Anderson wants a career that allows him to contribute to the game of basketball.

“If not playing professional basketball, I want to be a professional trainer so I can still be connected to the sport and still be around what I love,” he said.