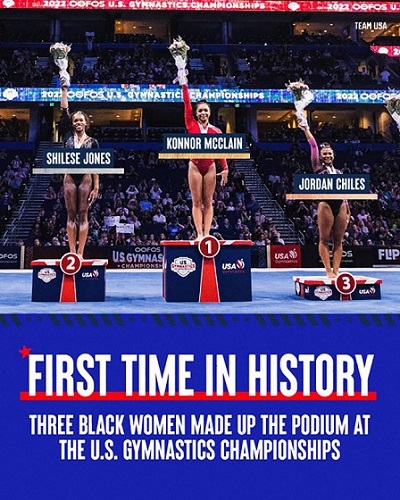 The trio made history as the first three Black female gymnasts to sweep the podium.

“It’s so unreal,” said McClain in an interview with NBC Sports. “I’m still in shock a little bit.”

This summer, the gymnast returned to competition following two stress fractures, a concussion, the flu, and her father’s death in December.

Her combined eight-rotation 112.750 beat out all competition for the night’s biggest prize, and she added balance beam gold (28.900) along the way, USA Gymnastics reported.

“This is the legacy of Gabby Douglas, Simone Biles, Dominique Dawes and so many other trailblazers who trained and stood alone,” Dr. Cathryn Stout tweeted.

According to Essence, Douglas became the first African American gymnast to win gold in the individual all-around and team events at the same Olympics in 2012.

Biles has won 25 World Championship titles and seven all-around titles and is tied with Shannon Miller for the most Olympic medals won by an American.

The next time fans can see McClain, Jones, and Chiles compete will be at the 2022 World Gymnastics Championships, which begin on Oct 29 in Liverpool, England. 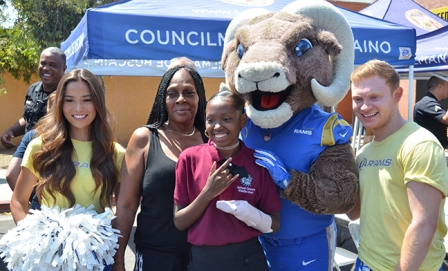 The Los Angeles Rams partnered with the L.A. Police Department, Carl’s Jr, and the L.A. Fire Department to host a fundraiser for a player from the Watts Rams who was involved in a fireworks accident.

La’Veyah Mosley, 12, lost her left hand and partial areas of her right hand in a fireworks accident on July 5. She also sustained first, second, and third-degree burns, ruptured eardrums, and temporary vision impairment.

A Carl’s Jr truck was stationed at LAFD Station #64 on August 24 for community members to donate $10 for a meal, all the proceeds went to Mosley’s medical expenses. Prior to the fundraiser, there was a ceremony honoring Mosley’s resilience.

“I feel very excited, very grateful, thankful for all the support and all the love,” Mosley said.

During the ceremony, Mosley was involved in a Q&A session explaining her injury. She desires to advocate against illegal fireworks. LAFD Assistant Chief Jaime Moore initially heard about the accident when it occurred, but learned more about Mosley through LAPD Deputy Chief Emada Tingirides.

“This injury was traumatic in itself, but it also affected her ability to play what she loved to do and that was play football with the team,” Moore said. “This is an incredible opportunity that we have to be able to support La’Veyah and her family.”

Mosley’s mother, Staneisha Matthews, noted how their family has been “overwhelmed with support.”

“I feel like the words of encouragement, the things that everybody is doing is what’s giving us the hope to push through,” Matthews said. “It’s been like our aid through all of this.”

Rams vice president of community affairs and engagement Molly Higgins noted how the Rams will match the amount of donations at the fundraiser. Rams safety Terrell Burgess also sent her a signed jersey.

“Her ability to turn this tragedy into a public service announcement campaign to make sure that other young people don’t suffer a similar tragedy is so inspiring and so uplifting,” Higgins said. “I’m just so proud of her and proud of the Watts Rams.” 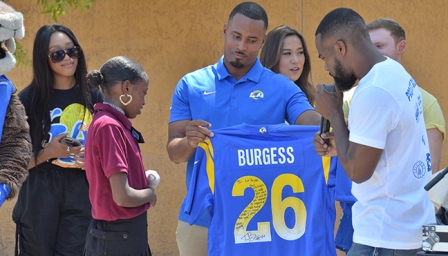 The police department also donated a laptop to Mosley. Tingirides noted how Mosley has a “beautiful soul and beautiful spirit.”

“I think when people have the tools and the resources that they need to be successful, they’re going to feel good emotionally, mentally, and spiritually,” Tingirides said. “We just wanted to make sure she has everything she needs.”

L.A. Lakers vice president of charitable affairs and executive director of the Lakers Youth Foundation Kiesha Nix mentioned that the Lakers are giving Mosley $2000 along with an autographed photo of the Laker Girls.

Her family will also receive six tickets to a Lakers game.

“This is not an easy fix and it’s going to take time and there are going to be days that are harder than others,” Nix said. “We just want to make sure that her family knows that they have friends in the community.”

If you would like to support La’Veyah Mosley, please visit her GoFundMe page at https://www.gofundme.com/f/txt78w-laveyah-reconstruction?member=20553213&sharetype=teams&utm_campaign=p_na+share-sheet&utm_medium=copy_link&utm_source=customer .

The NBA Retires Bill Russell’s No. 6 Jersey Across the League 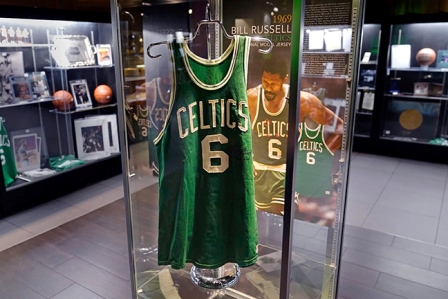 For the first time in the history of the NBA, Bill Russell’s No. 6 jersey is being retired across the league.  The NBA, and the National Basketball Players Association announced that the No. 6 worn by basketball great Bill Russell is being permanently retired by all 30 teams. 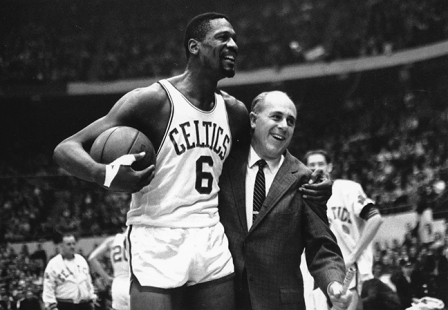 NBA Commissioner Adam Silver said, “Permanently retiring his No. 6 across every NBA team ensures that Bill’s transcendent career will always be recognized.

Bill’s unparalleled success on the court and pioneering civil rights activism deserve to be honored in a unique and historic way.”

Only baseball’s Jackie Robinson’s No.42 and hockey’s Wayne Gretzky’s No. 99 have been retired across their respective leagues.

Beginning this season, all players will wear a patch on the right shoulder of their jerseys and every NBA court will display a clover-shaped logo with the No. 6 on the sideline.

For current players who wear No. 6, they may continue to do so but the number cannot be issued again, the league said. 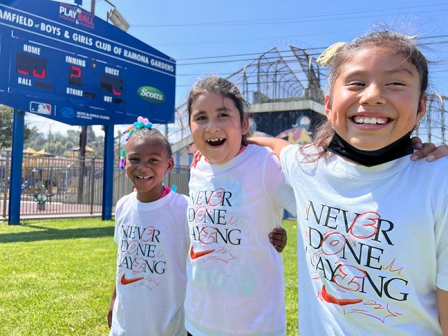 On the weekend before the MLB All-Star Game, the Boys and Girls Club of Ramona Gardens partnered with Nike to host a sports camp for the youth in Boyle Heights. The youth participated in a two-hour workout on the Dodgers Dreamfield at Ramona Gardens to promote the joys of being active.

The sports camp was for youth between the ages of eight and 14; youth were encouraged to bring their friends, especially if they had little to no experience in baseball or softball. Boys and Girls Club site director Jesus Delgado sees the camp as an opportunity for youth to learn about teamwork, build friendship bonds and have fun.

“We are so excited to partner with Nike and give our kids the ability to have some fun and get some exercise during one of baseball’s biggest weekends,” Delgado said. “Sports help youth not just physically, but mentally and socially as well.”

There were six stations where the youth could practice hitting, grounding balls, catching, sliding, and pitching on different skill levels. Nike’s partner Student Sports helped guide the youth through the stations.

Student Sports Leader Jordan Brown wants the youth to know the importance of being healthy.

“It’s very important to have the Boyle Heights community participate in an event like this because not a lot of kids in this area have access to free sports camps or sports in general,” Brown said. “It’s also great to get the members active and teach them about healthy lifestyles.”

For Kiana Anaya, 14, mentorship from coaches helps her answer questions that she has about the sport. She feels that it is meaningful that the youth get lessons in America’s favorite pastime.

“I was most excited about the drills and baseball exercises I’ll get to experience with my friends. I was also thrilled to be getting the opportunity to learn new skills as I go through these exercises,” Anaya said. “Having the opportunities to meet with coaches and mentors on sports was really eye-opening and lead me to learn and enjoy sports in new ways.”

The Boys and Girls Club of Ramona Gardens is one of the locations of Boys and Girls Clubs of West Gabriel Valley and Eastside. Their relationship with Nike started in 2017 when Lakers legend Kobe Bryant created the Mamba League in partnership with the two organizations. Since then, both organizations have collaborated in other initiatives to help youth in impoverished communities.

“I was super excited to learn [something] new,” Samantha Quiñonez,9, said. “I really want to gain new skills so I can join a baseball team and not be scared to do it. It’s important for kids like me to have access to sports to have a healthy lifestyle.”

Along with events like the sports camp, the Boys and Girls club is one of 13 organizations that are part of the LA Made to Play Neighborhood Initiative which is a collaboration with Nike and Play Equity Fund that creates equal play opportunities for Black and Brown girls.