2022 in Review — Featuring Some of L.A.’s Most Memorable Events Here are some of the memorable events that occurred in the greater Los Angeles area during 2022.

24 hours before Super Bowl LVI, superstar Issa Rae, became the first person to ever receive the key to her city. The actress, producer, and writer was recognized at the Taste of Inglewood on February 12. For five seasons, Rae put on for the city in her award-winning HBO television show, Insecure. Manifesting at its finest; the final episode of the series shows her character, Issa Dee, receiving the key to the city from the mayor, played by Tyra Banks. 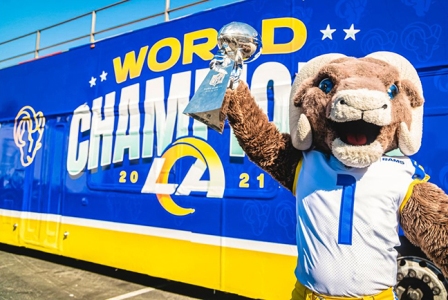 After their victory, the Rams took over Los Angeles during their Super Bowl Parade that following Wednesday. The 1.1-mile route began at the Shrine Auditorium and ended at the L.A. Memorial Coliseum. Thousands of fans flooded the streets to celebrate with the winning team. For their final hooray, the iconic Hollywood sign was briefly changed to read “Rams House”.

Tragedy struck in Windsor Hills on August 4 when Nicole Linton crashed her car into a United Oil gas station. The fatal incident took the lives of six people and eight were severely injured.

She sped through the intersection at 100 miles per hour around 1:40 p.m. that afternoon, causing a chain reaction of explosions and fires.

The 37-year-old traveling nurse from Houston, TX survived, and was charged with six counts of murder and five counts of gross vehicular manslaughter. Linton has been sentenced to 90 years to life in prison.

The late rapper Nispey Hussle received his Star on the Hollywood Walk of Fame on Monday, August 15. The posthumous honor was unveiled in front of Amoeba Music on Hollywood Boulevard, on his 37th birthday. Among supportive friends and fans, his grandmother Margaret Boutte, life partner Lauren London, father Dawit Asghedom, and siblings Samiel Asghedom and Samantha Smith, all attended the celebration and spoke beautiful words about the departed. On this same day, Hussle was acknowledged with a dedication at the new L.A. Metro K-Line located in Hyde Park at Nipsey Hussle Square.

During the presentation, City Councilman Marqueece Harris-Dawson recalled Hussle’s passion, along with involvement and investment in the station. He was a staple in the Black community as an artist, entrepreneur, leader, and philanthropist. He owned several successful businesses like The Marathon Clothing Store, The Marathon Agency, All Money In Record Label, and launched The Neighborhood Nip Foundation in 2018. Since his passing, his loved ones continue to uplift his legacy. Crenshaw Boulevard hasn’t had a rail service as means of transportation in nearly 70 years. The new K-Line opened October 7 at the intersection of Crenshaw and 48th Street. The line is Metro’s single largest transportation investment from the Crenshaw District to Hyde Park, Leimert Park, Fairview Heights, Inglewood, and Westchester, designed to provide a faster, reliable, and more convenient way for Angelenos to travel to work, school, and surrounding neighborhoods.

Metro is expected to complete a connecting station at LAX by 2024 and anticipates the line will carry more than 32,000 daily passengers by 2035. Residents can sign-up for a free 90-day Metro pass or apply online for the Low-Income Fare is Easy (LIFE) Program for fare discounts that can be applied toward purchases of weekly/ monthly transit passes. 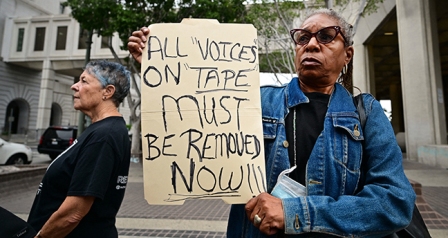 Since being exposed, former L.A. City Council President Nury Martinez and former L.A. County Federation of Labor President Ron Herrera, have resigned. Other council members who participated in the meeting, Gil Cedillo and Kevin de Leon, are still holding their seats despite public outrage. The leaked audio has now prompted a Sate investigation. 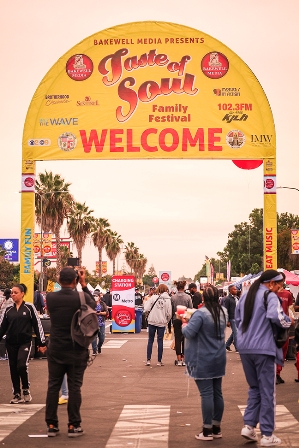 The Taste of Soul Returns to Crenshaw Boulevard

The biggest community block party in Southern California returned to the streets after a two-year hiatus.

On October 15, over 300 food and merchandising vendors came out for the 17th Annual Taste of Soul Family Festival.

The festivities included a vast variety of food from local and international vendors, a virtual reality center, high levels of entertainment, and an overall celebration of the Black experience.

Every year its free to the public from 10 a.m. to 7 p.m. on Crenshaw Blvd., between Barack Obama Blvd. and Stocker Street. 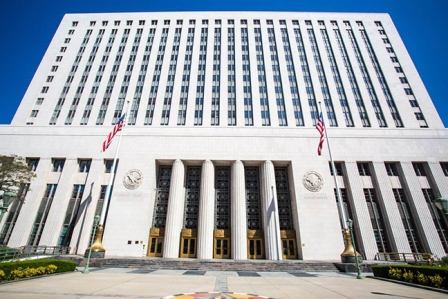 On October 27, the Los Angeles Superior Court deliberated in favor of former County employee, Lorna Young, who was experiencing intentional segregation in the workplace.

Young was employed for almost 20 years before she was forced to resign in 2014 from DPSS.

Her district office failed to act when she spoke out about her supervisor purposefully racially separating the unit by race. After no resolve with the Board of Supervisors, Young then sued L.A. County and was awarded $3.5 million in a settlement. 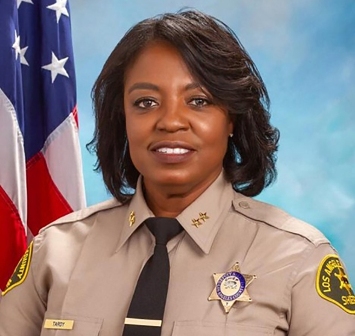 On November 30, Sheriff-Elect Robert Luna appointed April Tardy as his interim undersheriff, making her the first and only Black woman to hold the position in the department’s history.

The 28-year sheriff veteran now holds the position of Captain and second-in-command. Given the long history of racial bias, Luna’s selection purposes some change in leadership and representation among the department. 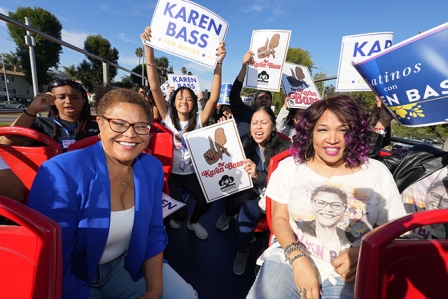 The nation’s second-largest city has elected Karen Bass as their 43rd Mayor. The first Black woman in its entire 241-year history, is leading City Hall into the new year.

As the historical moments continued during her inauguration, where the former Congresswoman was sworn in by Vice President Kamala Harris on Sunday, December 11, in Downtown Los Angeles at the Microsoft Theatre.

Bass was victorious over real-estate developer Rick Caruso, with more than 53% percent of votes at the end of the election. On her first day as Mayor, she declared a state of emergency on homeless, as Los Angeles has the highest number of unhoused individuals with almost 42,000 people living on the streets. 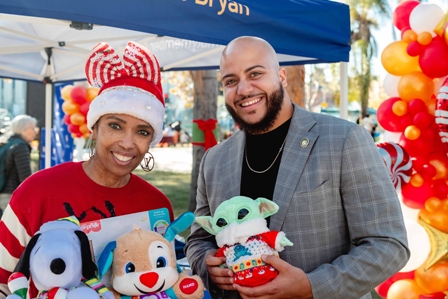 “Christmas in the Park has been a meaningful way our office can bring the community together every year to provide relief during a time of the year when poverty and struggle are most acutely felt,” stated Bryan. 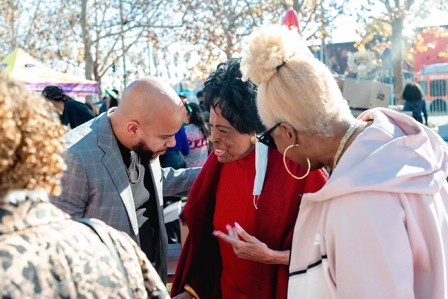 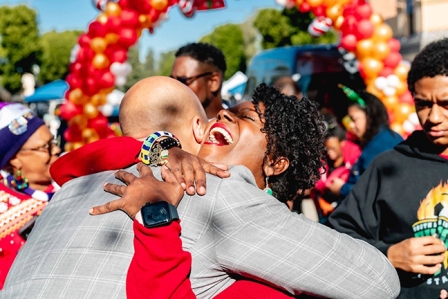 While addressing the community during the event, Assemblymember Bryan reminded people that even though the need is most evident during the holiday season, fighting for economic justice and ensuring all families have an opportunity to thrive are key daily goals for his office.

Record Number of People Signed Up for Obamacare During 2022 President Joe Biden said he promised to lower costs for families and ensure that all Americans have access to quality affordable health care.

On Tuesday, Dec. 27, the president proclaimed that he’d delivered on that promise.

A record number of people – nearly 11.5 million – signed up for insurance on HealthCare.gov – about 1.8 million more and an 18% increase over last year.

With enrollment remaining open through Jan. 15, and not counting those who signed up for coverage through their state marketplaces, Biden said gains like those have helped to drive down the uninsured rate to eight percent, the lowest level in U.S. history.

“In recent days, we received further proof that our efforts are delivering record results and bringing families the peace of mind that comes with health insurance,” the President stated.

“Right now, four out of five people who sign up for health insurance through the Affordable Care Act can find health care coverage for $10 a month or less. These lower rates were set to expire at the end of this year, but thanks to the Inflation Reduction Act, we were able to extend them and save millions of Americans on Obamacare an average of $800 a year.”­­­­­

The Biden administration noted that, on Jan. 1, Americans will see the benefits of additional cost-saving measures because of the Inflation Reduction Act.

That includes seniors realizing a month’s supply of insulin capped at $35, Medicare beneficiaries paying $0 out of pocket for recommended adult vaccines covered by their Part D plan, and prescription drug companies needing to pay Medicare a rebate if they try to raise their prices faster than inflation for drugs administered at a doctor’s office.

“We’re not finished working to make health care a right, not a privilege,” Biden declared.

The administration continues to encourage individuals to visit HealthCare.gov by Jan. 15 to take advantage of lower rates and sign up for health care for the coming year. The following is a list of the L.A. Watts Times’ top 10 national stories affecting the African American community.

After a months-long process beginning in February, Ketanji Brown Jackson, 51, was sworn in as the 116th Supreme Court justice and the first Black woman to serve on the high court. After a two-week trial, three Georgia men were convicted by a federal jury in the Southern District of Georgia for committing hate crimes and attempting to kidnap Ahmaud Arbery, a young Black man who was jogging on the public streets of Brunswick. Griner, who plays with the WNBA team Phoenix Mercury, was arrested on smuggling charges in Russia.

She was detained at Sheremet­yevo Inter­national Air­port after the Federal Customs Service found she was carrying vaporizer cartridges containing less than a gram of hash oil. Incensed by a joke that Rock made, which poked fun at his wife Jada Pinkett Smith’s bald head,

Will Smith slapped the comedian on the same evening he received an award for Best Actor at the 94th Academy Awards. A mass shooting at a Tops Friendly Markets supermarket in an East Side neighborhood of Buffalo, New York left ten people were murdered, each of them Black. Additionally, three were injured. Disassembling 50 years of legal protection, the U.S. Supreme Court overturned Roe v. Wade, legislation that made abortion access in the United States a federal right. The decision begs the question: what fallen rights will follow in this wake? Los Angeles City Council member Nury Martinez resigned from her seat on Council District 6, two days after stepping down from her post as president for making racist remarks.

The remarks, which were made while talking with fellow Councilmembers Kevin de León and Gil Cedillo and labor leader Ron Herrera, were about councilman Mike Bonin’s Black son. Rep. Hakeem Jeffries of New York was elected unopposed to succeed Nancy Pelosi as leader of the U.S. House of Represen­tatives.

As House minority leader, Jeffries, 52, will become the first Black person to lead a major political party in Congress. An uptick in hate speech since Elon Musk took over the social media platform that has long thrived due to the engagement of Black influencers.

Preliminary test scores across the country indicate that online schooling in 2020 and 2021 resulted in significant learning loss for children. Minority and lower income populations were most vulnerable.